Don’t know how I have lived some 15 years ago, my live was drastically changed when I couldn’t connect to an internet for some two weeks.  For one thing, I could not update my blog. Not to mention that my family actually lives half way around the world and my phone in BeiJing happened to be a China only phone thanks to my genius mobile plan saleswoman. 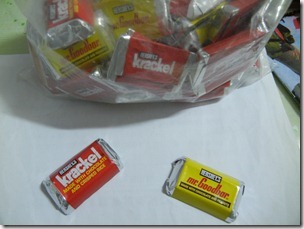 Mom brought Hershy’s chocolates from the states, though they are exclusively for relatives, I still made my bid to take out my favorite flavors –peanuts and rice crackers 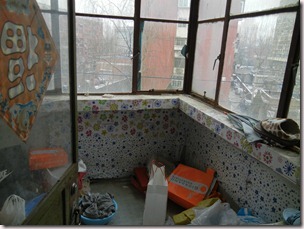 its balcony stashed with useless boxes and bags 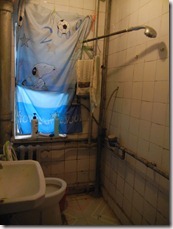 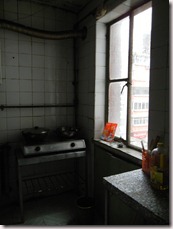 kitchen was ok, not impressed with the bathroom.  What I missed in this place is a sofa.  It has a lot of empty walls, but I’m not gonna furnish my apartment with my own sofa (since I can’t move it away with me and moving here is expensive) 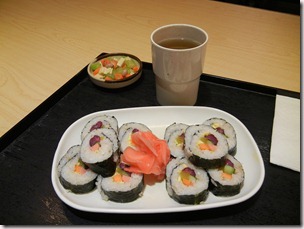 I had my first set of sushi in China when meeting up with Hilary from Tianjin. 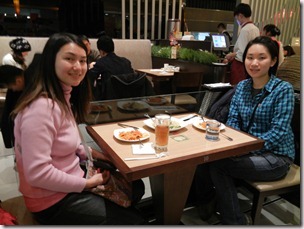 afterwards we went to Pizza Huts since we always liked to eat there. 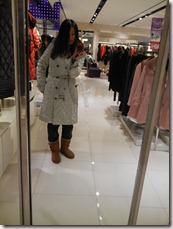 Then Hilary complained she was not too impressed with her last down-feather jacket so we went around and looked for her jacket.  Little did I know, I eventually bought a jacket instead of her.  I wasn’t going to buy a jacket, but I liked this one so much.  Before this, I only had one down-feathered jacketed, and I got that one because Hilary talked me into buying it.  That was a red Playboy jacket for 99kuai.  I had no idea that was actually quite a good ideal although at the time I didn’t really need it (since I hadn’t planned to stay in China).  I only bought it because it wasn’t a lot of money and Hilary said that I might need it someday… and that someday was this year. 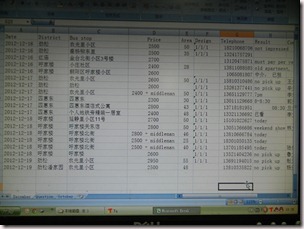 I was going through so many apartments that I eventually kept an excel database.  Sorry this is a Chinese-English blended database for my own convenience 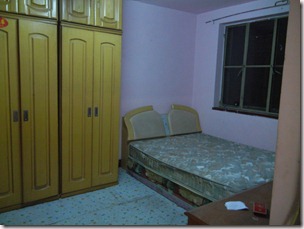 this apartment was cheaper, but I’m not too impressed with its floor 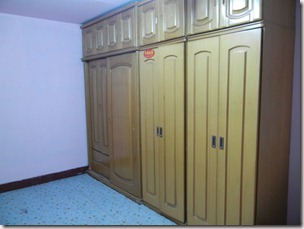 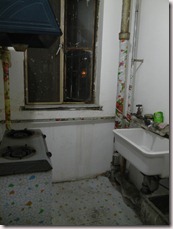 but I do like its wardrobes for the price of the rent, and its kitchen is not too shabby. 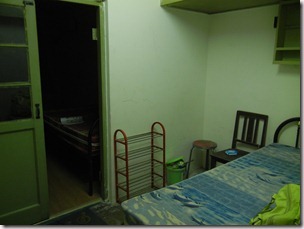 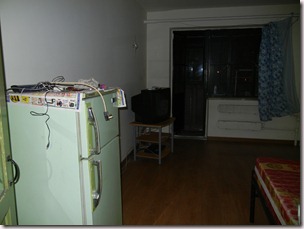 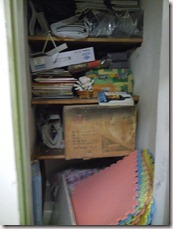 Since I wasn’t too impressed with the last apartment’s floor, the agent took me to this more expensive apartment.  I like it better, first, it’s got an extra bed for guests… but they really need to clean out their pantry. 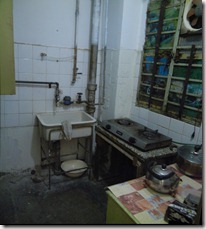 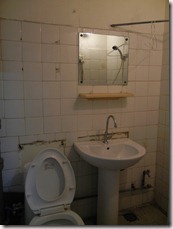 Kitchen and bathrooms are quite old for the price

then I went to another subway station and found this apartment.  Apparently the owner built another 2 floors on top of his house on his own and rents them out… from the outside, the area doesn’t look as clean as the city (more like a busy little town instead of city), but once you step inside, you get a clean feel. 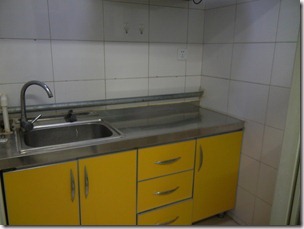 and everything was new… 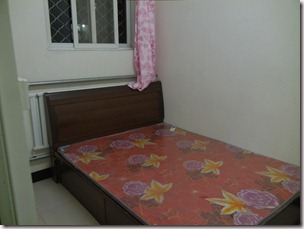 including the bed… I really liked this apartment, then my cousin showed up.  After chatting with the owner he quiet whispered in my ear, “I would suggest you to not rent here.” “Why?” I was quite surprised.

It was then I finally got the concept of “peasant house.” This house, among many others around it, was not built with government approval.   Originally this area was just a village. After Beijing expanded, the edge of the city starts to get into this village.  Since these houses and lands were not owned by the government like they would in the city, many farmers starts to build additional floors on their own houses without any proper building code.

But indeed, after traveling in some other country, I wouldn’t mind the environment at all.  But my cousin still suggested against it. 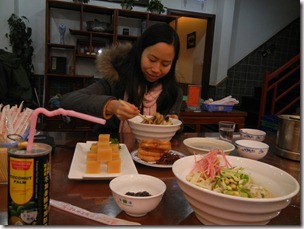 My cousin Li Wenyan from Wuhan came to Beijing for a training.  That night I brought her to one of the best soybean sauce noodle (a very well-known Beijing delicacy) places in Beijing (the one my coworker brought me to the other day).  I found its headquarter restaurant not far from the city center, so we decided to give it a try.  Little did we know it would took us an hour to find it since we took the wrong road….

but the effort was certainly worth it…. after starving our way to this restaurant, we had our stomachs fully satisfied before stepping out of its doors. 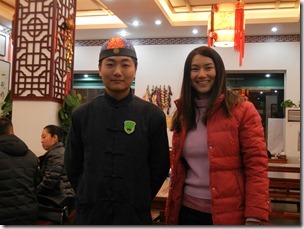 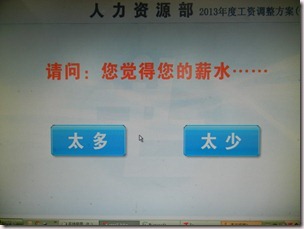 Question: You feel your salary is… 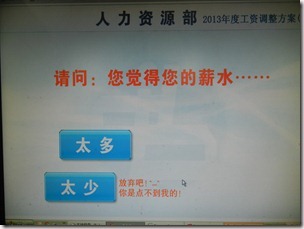 and when clicking “too low” the button will move away until you get this message, “give up, you will not be able to click me.” 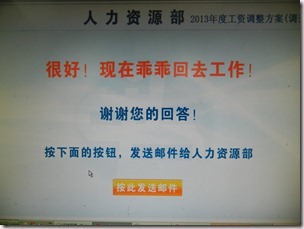 so you are forced to click “too high” and then it will bring you to this page, “great! now go back to work nicely.  Thank you for your answer!” 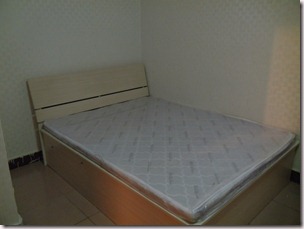 Found another cheaper apartment.  Everything’s great about this one except it has no public heater. 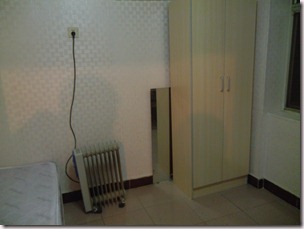 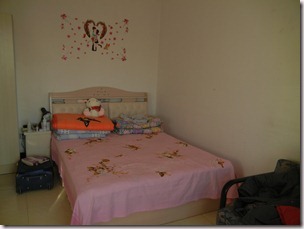 and I finally found my new home.  Except this isn’t what I had originally planned.  I was going to look for a year contract, but these couple were desperate to get out of this apartment (because they just bought a new house) and they were willing to make a steep discount for the remaining 5 months of their contract.  After a lot of thoughts, I decided to take the risk and took it in.

But I love the little decorations so much.  The man of the house actually pasted those wall paintings in.  “It took me an entire afternoon to put these up,” he sighed with reminiscence.  Besides, the bus station is right downstairs, and the new metro line 6 is just 5 minutes away.  It will be open by the end of this month. 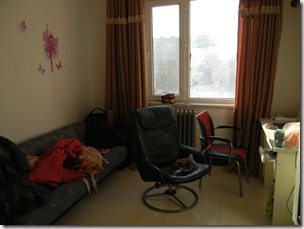 the window faces south, and every day it was full of light 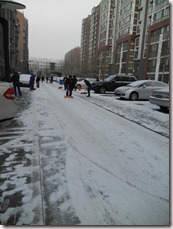 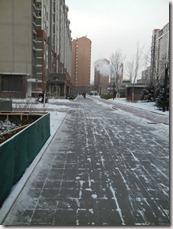 It finally snowed!  and I woke up by those snow cleaners shoveling noise, I was wonder what was going on outside… but now the street is clean and I don’t have to worry about slipping 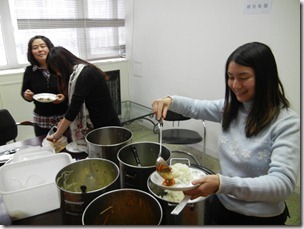 I went to one of our clients place and had my very first “work meal”.  Their office actually provides the meal for their employees so we also jumped in.