Ok, first, I must admit that I’m not your true 100% native English speaker, but I got a translation job as a native English translator! Coincidence?  Alright alright, I was not born in America, my parents do not speak English, and my English isn’t 100% perfect and I do – according to Jonovan – make cute mistakes occasionally… but comparing to the rest of 100% native speakers, being a 90%-95% native English fluent and 75%-80% native Chinese fluent speaker certainly gives me a bit of personal advantage than most of natives, especially ABCs who never took notice of the importance of Chinese *wink wink*.

After a year and half of being happily unemployed, nothing makes me more happy than to see some money injection into my rather empty bank account.  Just like how most people slowly drained their lives during their workweeks, I felt that week before working passed without much memory. 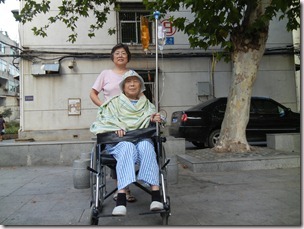 My grandma has gotten better since the last time, and she could get in a wheelchair now.  Mom has been pushing her everywhere in the hospital yard. 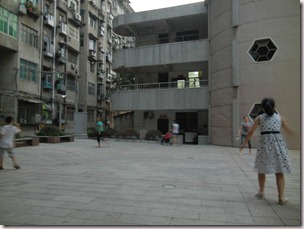 Watching recreational activities with my grandma in her wheelchair 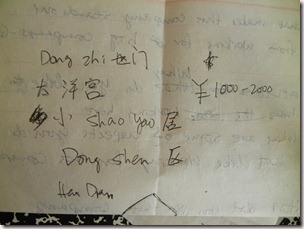 I have a friend from San Antonio named Haike who is currently working at a company in BeiJing.  After several interviews, I found out I was actually admitted the company that he worked with, so I called the HR to verify… several days later he called back.  He loved BeiJing and suggested following places to stay if I ever make my way to BeiJing.  Unfortunately, my fingers could not write very good Chinese nowadays, not to mention I don’t know where to start with half of the words he mentioned… 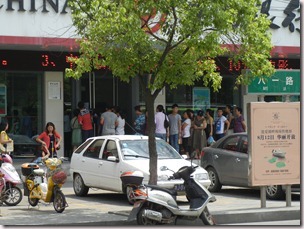 Long line of people lined up by the bank, I wonder what’s so special today

HuangGang East Gate roundabout not far from my grandma’s house.  I like to have my breakfast around here every morning.  This used to be the east gate of the old city wall.  Even as recent 10 years back, there weren’t anything near high-rises built beyond this roundabout. 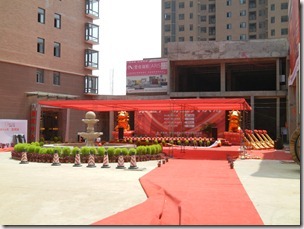 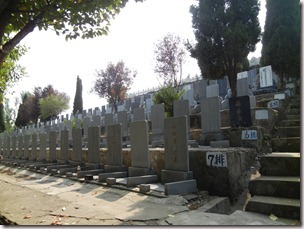 Before going to Work, I decided to sweep my grandpa’s grave.  He passed away when I was a little over 1 year old.  I don’t remember much about him, but my mom used to tell me a lot of good stuff about my grandpa.  Even nowadays, I could feel my mom missed him very much. 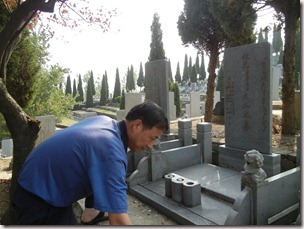 Uncle lighting up the firework before leaving 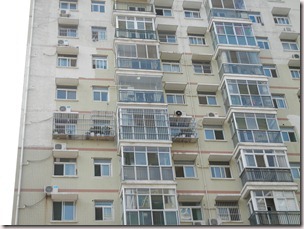 Out of all the families in this high-rise, one family decided to put strong bars all around their windows. Are thieves really gonna climb through there? 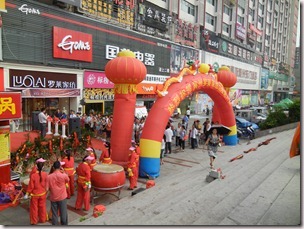 One thing I liked about living in a small town, everything is conveniently packed together.  I don’t have to walk very far to spot one of these every other day… Those stages are usually set up for store opening and/or promotions 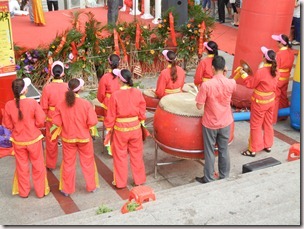 These folks even brought their enormous drum 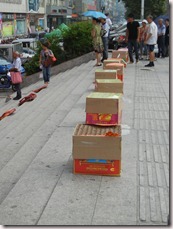 Boxes of fireworks lined up, unfortunately I liked to breakfast in a area not far from here and I had to endure their noise 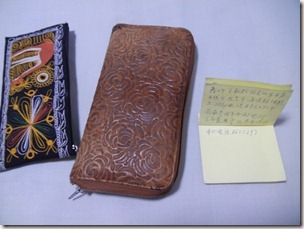 Since I’m staying in China for quite a while, it’s time to look for a real wallet.  My mom mentioned that I could probably use my grandma’s wallet for the time being since with her paralyzed she couldn’t use it any more.  So I swapped into my grandma’s yellow leather wallet and switch all of her stuff into the black sleeve I bought for her in Bolivia.  While going through her stuff in her wallet I found this yellow post-it booklet.  It briefly introduced herself and then listed all the important contact numbers.  Ah this must be a self-description in case something happens to her on the street…. 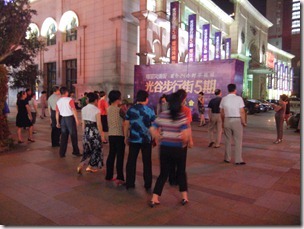 I moved to WuHan earlier September to start my job as a translator. On my way home I had to pass one of the major plazas in the city.  I always spotted these ladies trying to learn dance in the middle of the plaza, oblivious of hundreds of the passersby every night. 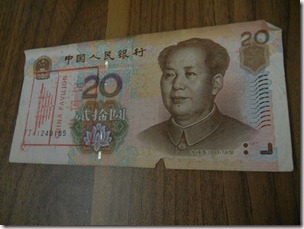 I met Lewis, a Canadian translator, and Yulia, a Russian translator, at my new post.  We went out to eat during my 2nd day of work.  Lewis proudly showed us the precious bill he carried around with him…. 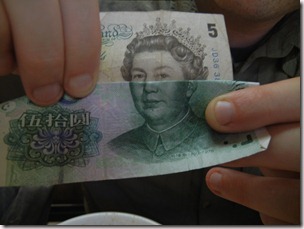 Queen Elizabeth on top and Mao on bottom 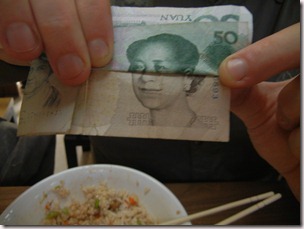 2 thoughts on “Before and After Starting My First Translation Job”