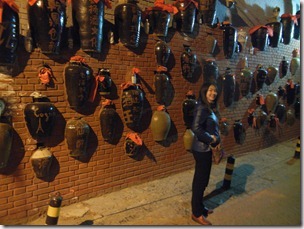 Stopped by a bar with all these wine jars embedded in the wall, I wonder if they were real….

I got some couchsurfers in my apartment.  Dominika is a Czech and her friend Robin is a British.  On my profile I said my sofa could only fit one person, but they told me they aren’t that big so they should be able to fit in a twin-size bed… well… they look quite European.  As I was wondering about that, and no, they won’t fit in.  Eventually I had to switch with them so that they could fit in my queen-size bed… 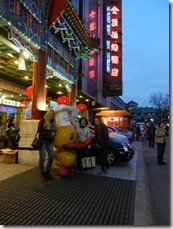 and the first thing they wanna try is Beijing roast duck.  So I brought them to Quan Ju De, the best duck place.  I think the entire 1.5 billion Chinese know this place because they used to serve the royal palace back in the days, but I could be wrong *chuckle* 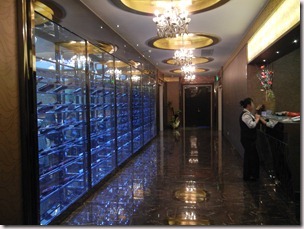 Me family had actually tried this place when I was little, but it’s been some 20 years since I had been here.  I definitely didn’t know that they have expanded into a few branches, so we landed in this lavish 5-story Wangfujing (a famous shopping district) branch. It’s hard to imagine that not only all 5 stories serving just Beijing roast ducks, but all of them are packed. 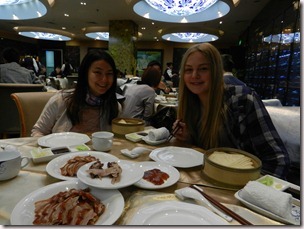 Sounds like my guests are the only non-Chinese looking people in the room.   A typical Beijing duck costs about a 50 to about 100 yuan, and I was told that the duck here, due to its brand, costs about 200 per.  Ok, that’s not bad for three people to split the cost.  Until when we saw the menu.

“Jenny, the lowest price on this menu is 600.” Dominika gasped.

I took over the menu.  The entire menu was bragging about their packages, starting at 600 for 2 people, to some 2000 for 6 people…. Well, we just want the duck.

When the waitress came around, I asked, “Do you have just the ducks?”

“Yes, we do.” She smiled, “but I would recommend you the 600 yuan package, you will get ducks and some other Beijing delicacies.”

I turned around and saw a chef busy cutting a whole roasted duck, so I pointed to that, “I just want that.” I told her.

“Because you will be charged a 10% service fee if you just eat that here.” She sneakered.

“Ok, what about we add something else along with the duck, do we get charged a service fee?”  I was thinking maybe we will add something a little more to get that service fee waived, at least we will get something in return – despite the fact that I actually don’t mind a service fee in a nice restaurant like this because in U.S. we pay 15-20% service fee.

“So what condition we could get the service fee waived?  We have to order the 600 yuan package?”

So you would recommend a 600 package, then tell me to not order the 238 duck only because I would get charged a service fee?  I feel sorry for all the foreigners she served here.  How surprised they would be when they followed her recommendation and still found a 10% service fee on their bill at the end of the dinner. 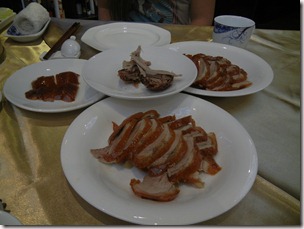 Different ways to cut the duck.  “So which way do you want us to cut it?”  The server asked.  Before we could settle down with a decision, they’ve already finished the cutting.

We ordered a whole roasted duck and a side dish.  The roasted ducks came in with either roasted bones or the bone soup (with unlimited refill).  The duck itself is already more than enough for the three of us.  We couldn’t even finish the side dish.  The entire bill came out to be 400 yuan, much more reasonable than the 600 yuan package. 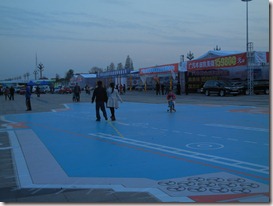 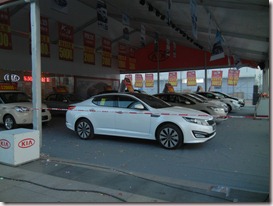 When visiting my grandma at her little home town, there was a auto show there.  I haven’t seen anything like that in a Chinese third-tier city.  Apparently this show was slated as the biggest event in town, with the most expensive around 300,000, a Grand Cherokee. 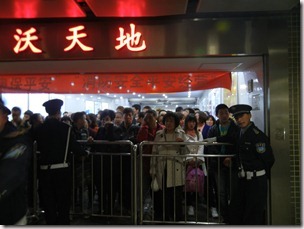 Hui came over from Seattle during the weekend, so I took her to the zoo area for shopping.  Apparently the subway was so crowded with shoppers that the police had to block the crowd and release them separately. 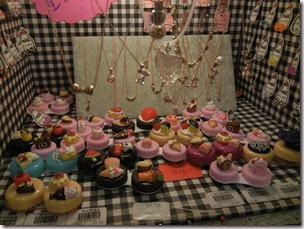 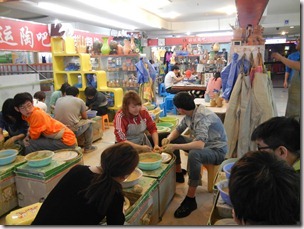 Pottery shop, where you get lessons and make your own pots 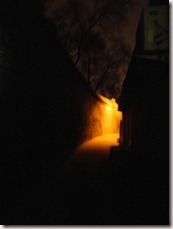 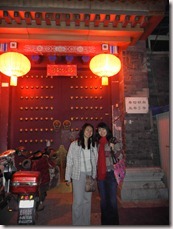 A friend recommended a Beijing local cuisine in a hutong (traditional Beijinger neighborhood alley). After getting ourselves lost in the maze of hutong for a while, we finally found the place. 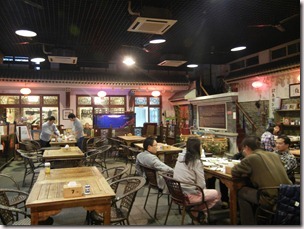 With the tiny sign outside, you definitely can’t tell the size of this restaurant. 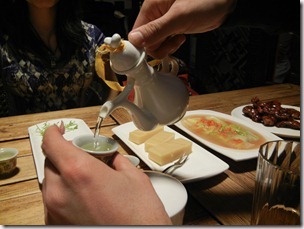 The restaurant stores its wines in a cave downstairs.  I have to say, this is the first Chinese wine that I actually liked.  It tasted like a flower, fragrant yet sweet. 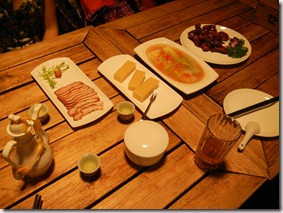 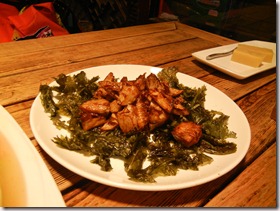 The traditional Beijinger dishes, I’m not sure what are the leaves on the picture on right side.  The leaves were grilled to crisp to serve with the pork.