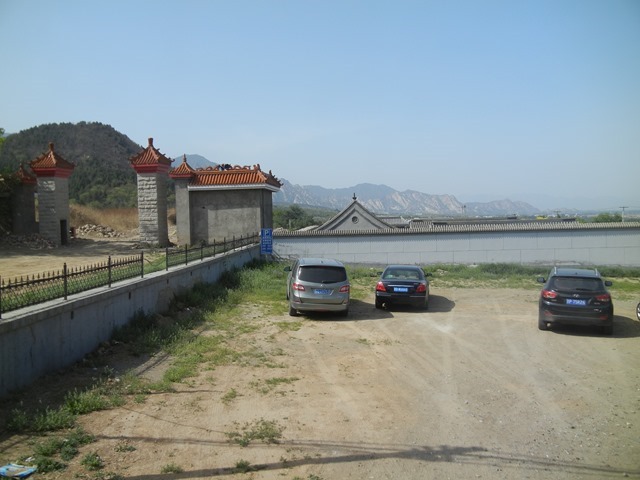 Our final destination for the day was Dajue Temple (大觉寺).  The temple sets right at the foot of West Mountain outside of Beijing.

As our bus rolling in, I was taken by surprise – this must NOT be the temple?  To my relief, they aren’t.  They are the new shops near the temple that is still under construction, and also served as a parking lot for all the visitors.

Many Chinese love to play with the temple’s name, as second character has 2 different pronunciations and meanings accompanied with each of the pronunciation.  Many Chinese just went with the other “suggested” pronunciation – Dajiao Temple, or Deep Sleep Temple. 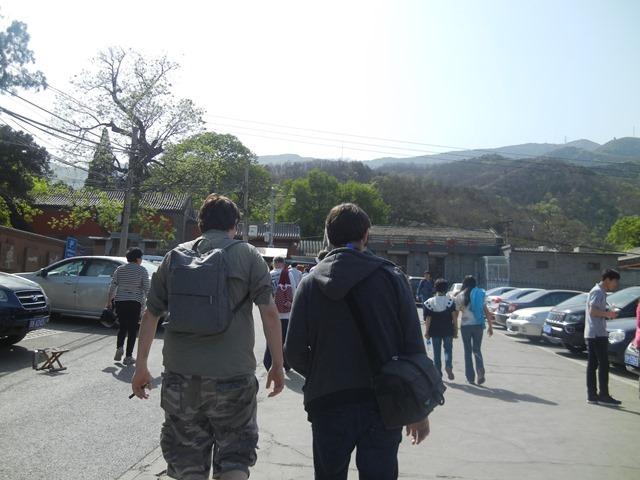 Lewis and Jeremiah, Canadian and American, are my former colleagues on translation team.  Lewis later moved on to work in our client’s company, Beijing magazine or the host of this event. 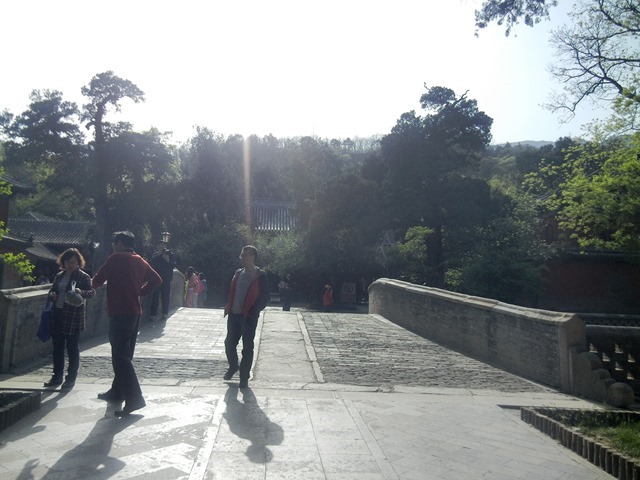 Entrance of the temple. 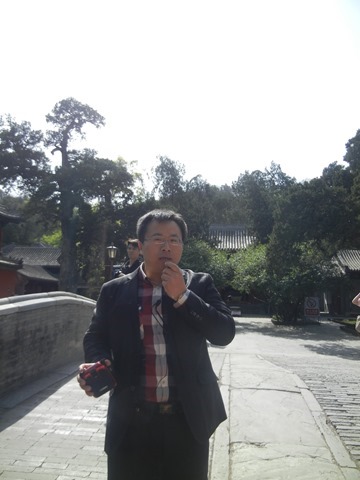 Our guide, the respectable Mr. Wang, who is among the most knowledgeable about this temple. 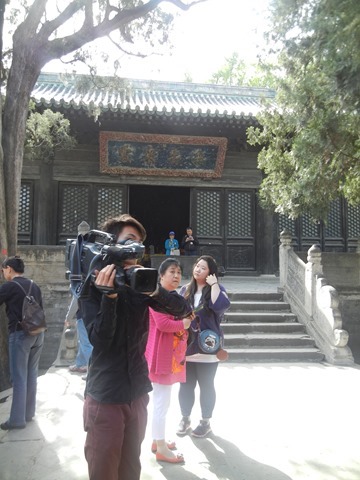 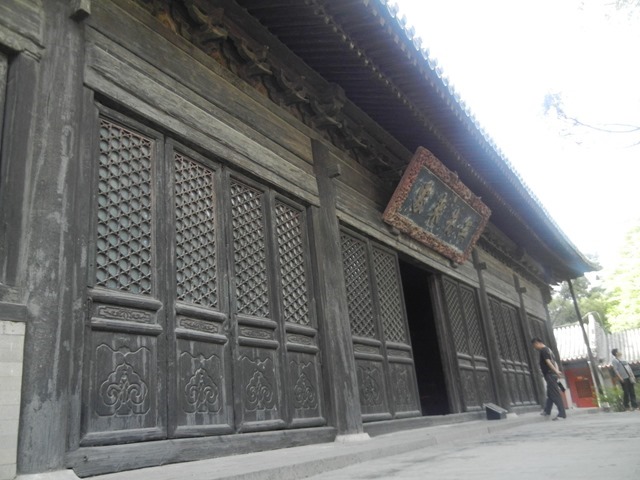 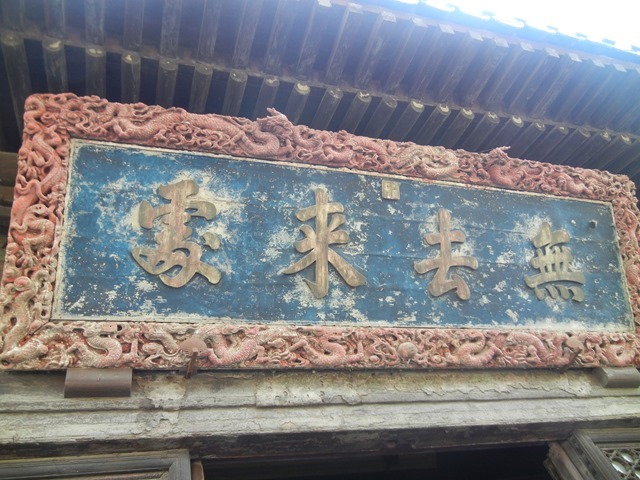 The sign was designated by Emperor Kangxi, one of the greatest emperors, some 400 years ago.  It was smashed by a band of soldiers running from their enemies, thinking it was bad omen, but the word simply means “peace of mind – from emptiness it comes, and it will go back to emptiness”.  The archeologists pieced the frames back but the original characters were gone for good. 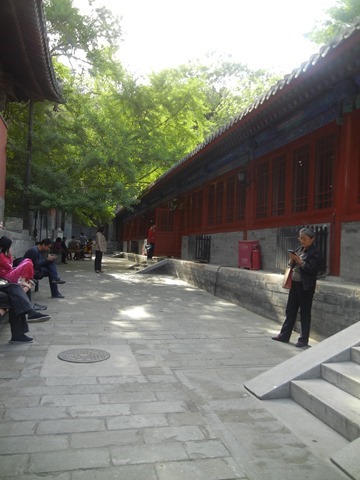 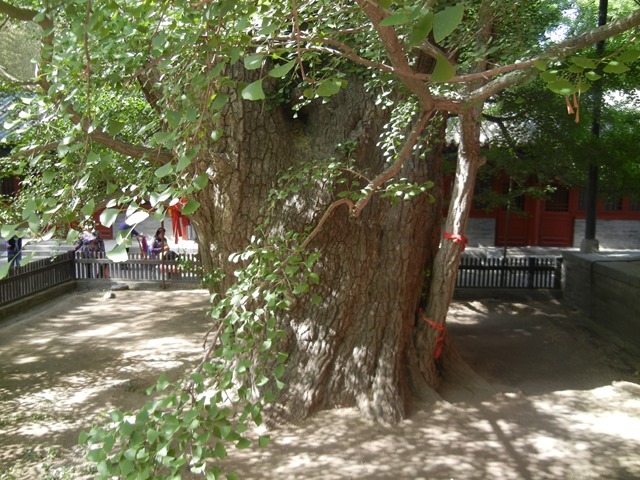 The oldest tree in the court yard, more than 1000 years old.  It was probably planted when the temple was just built. 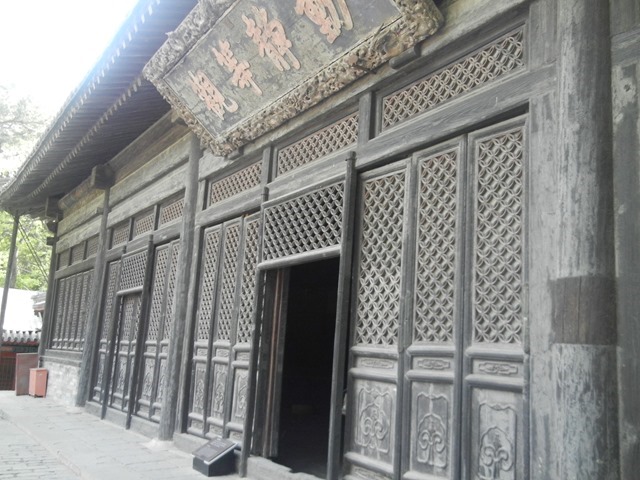 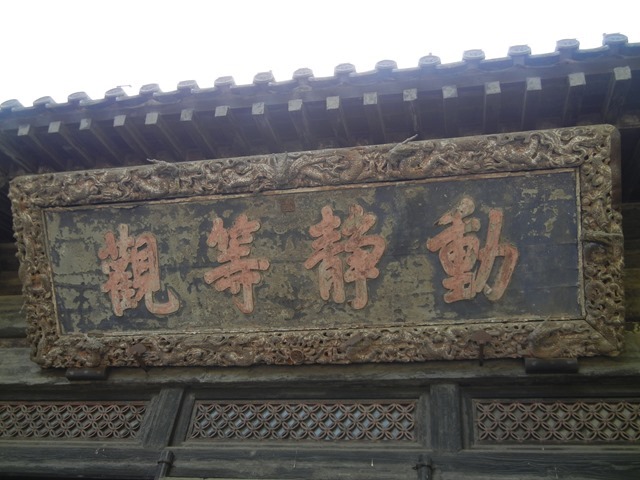 The sign was original, also designated by the great Emperor Kangxi. 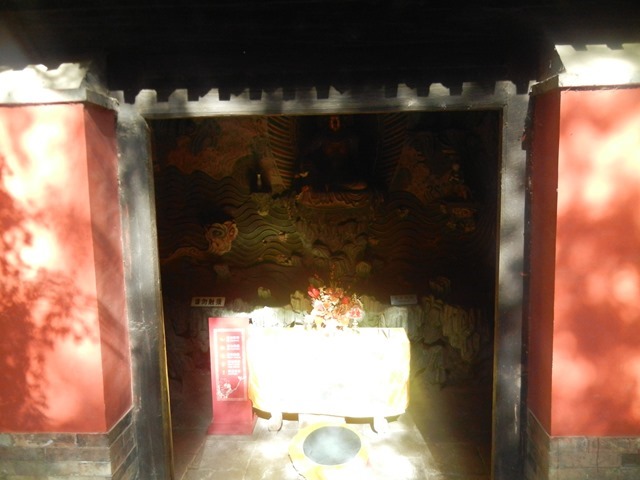 On the back of the hall is a small altar with relieved goddess. 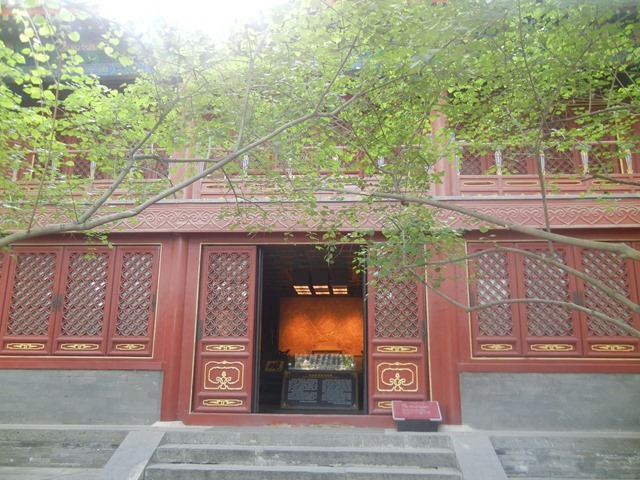 Back hall used to serve as scroll storage. 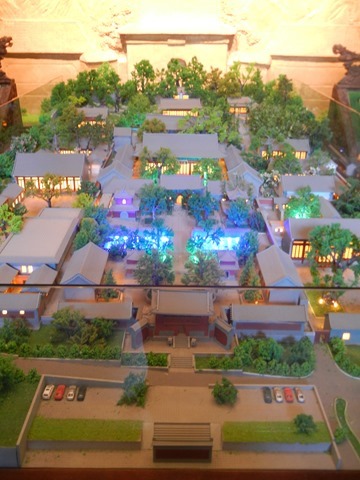 Now it acts as a small museum that also houses a model of the temple’s layout. 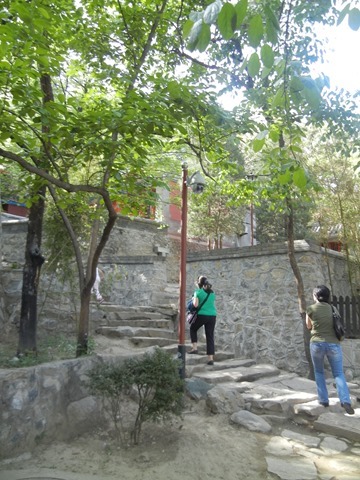 Time to climb some more. 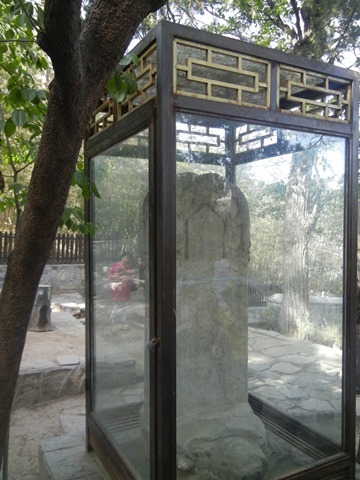 A stone inscription sits at the side of the hill. 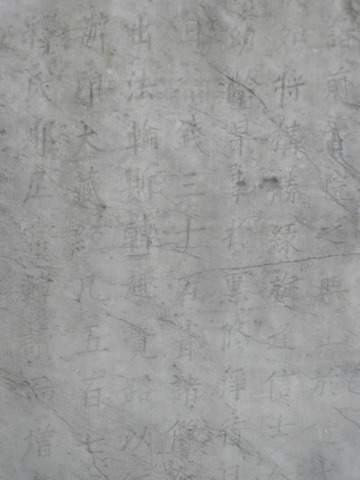 The stone was broken down at one point, so the side that faced down preserved the inscription from weathering. When they pieced the stone back, you could still see some of the characters used back then resembled the Simplified Chinese rather than the Traditional Chinese characters that we have used 100 years ago. 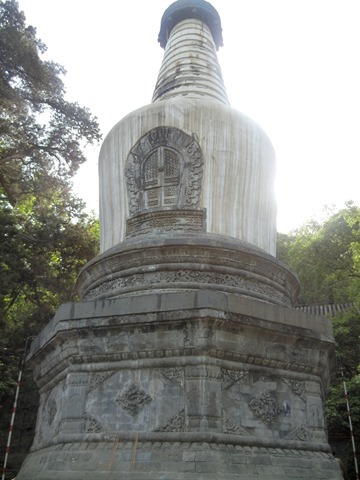 Unlike some other schools of Buddhism, Chinese tend to build a huge stupa in the back of the temple, or somewhere prominent within.  In this case, because the temple sits on a hill, it is at one of the highest points of the the temple and naturally oversees the entire temple. 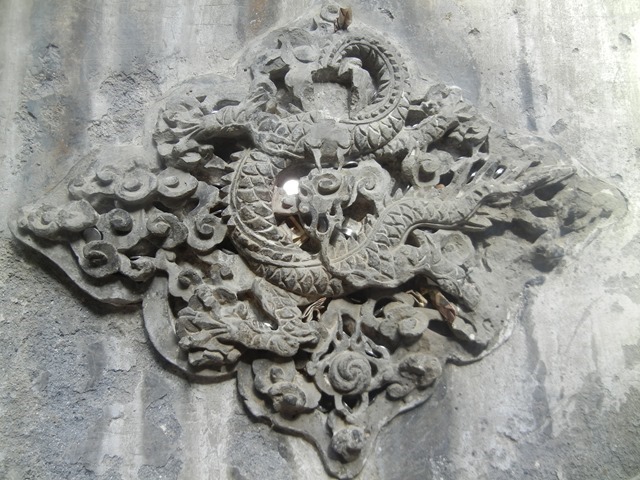 Tourists stuck coins into the holes of the stupa relief for good fortune. 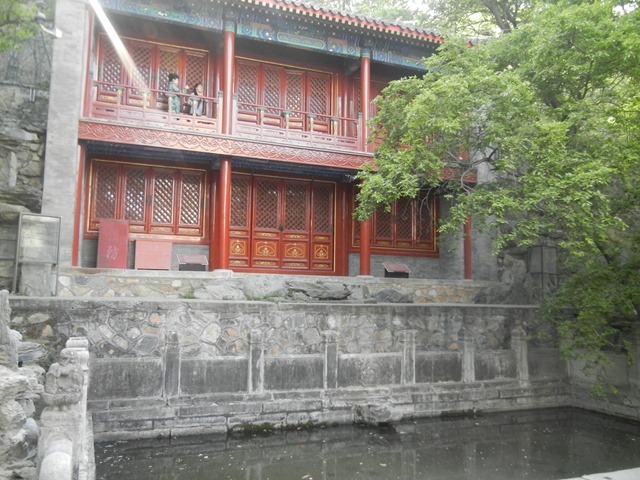 The little house and pond behind the tower.  From the old scripture it talked about this pond served as fountain where the stone lion at the bottom back would spit out water. The water was so clear that the entire temple used to be called “Clear Water Courtyard” before receiving the current name. 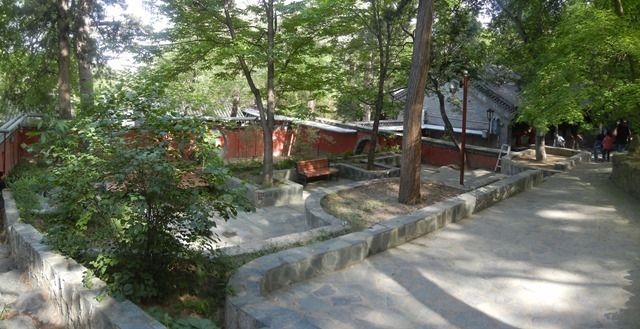 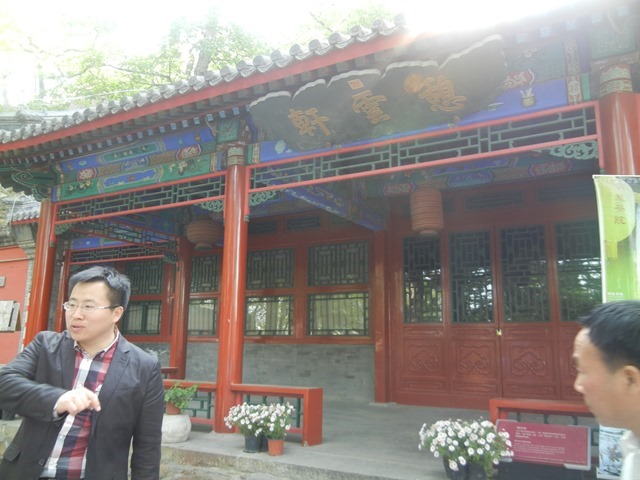 A small room where the German Embassy used reserve for their summer retreat.  This area is naturally a few degrees lower than Beijing, along with the abundance of trees and shades, makes it an ideal spot to escape from the summer heat. 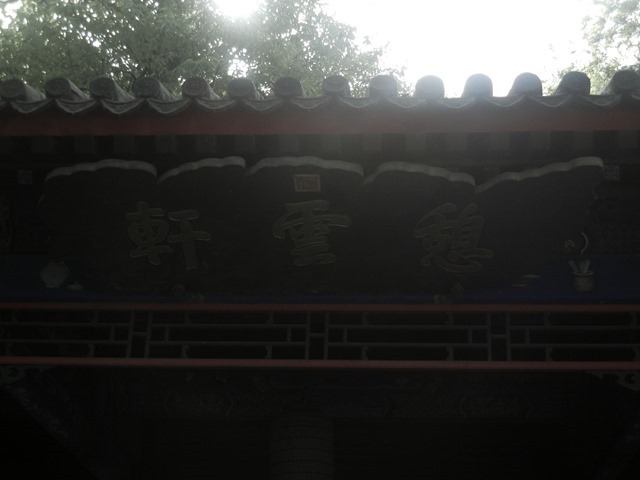 The room’s name, “Small Break in the Clouds” is originally written by Emperor Kangxi. The stone sign has survived to today. 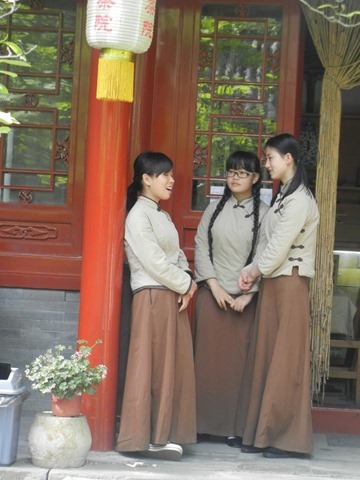 Tea girls working for the tea house in the temple. 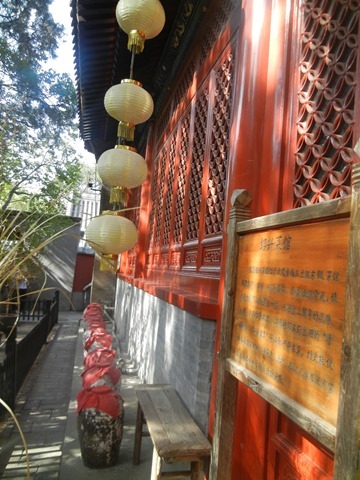 A little café that serves Shaoxi dishes and its famous rice wine. 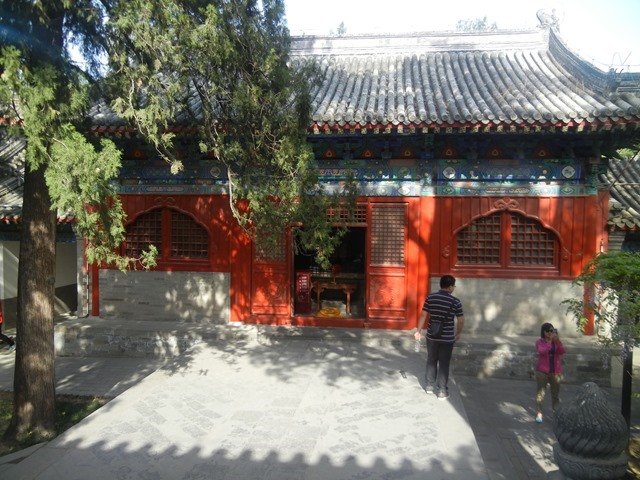 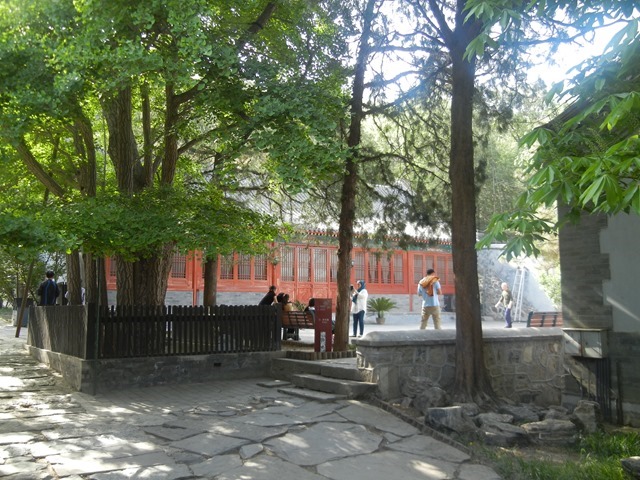 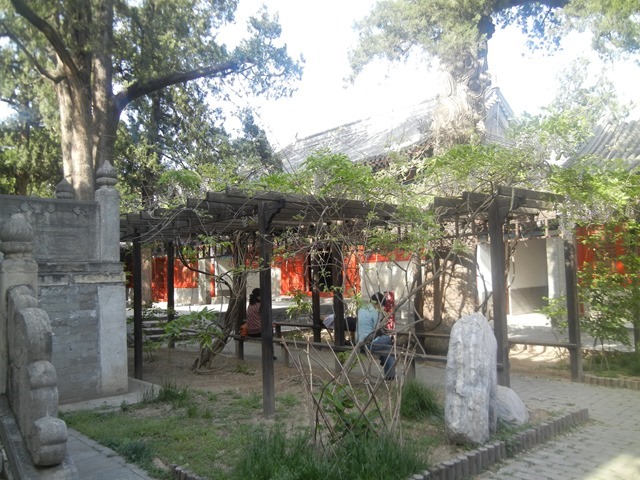 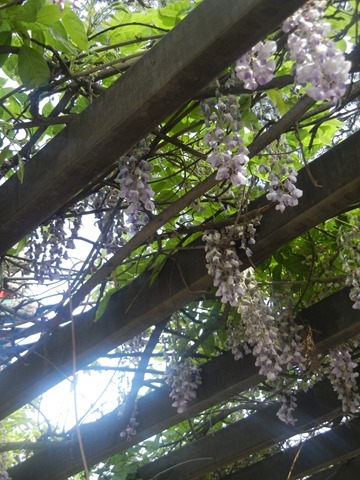 Are those really grape flowers? 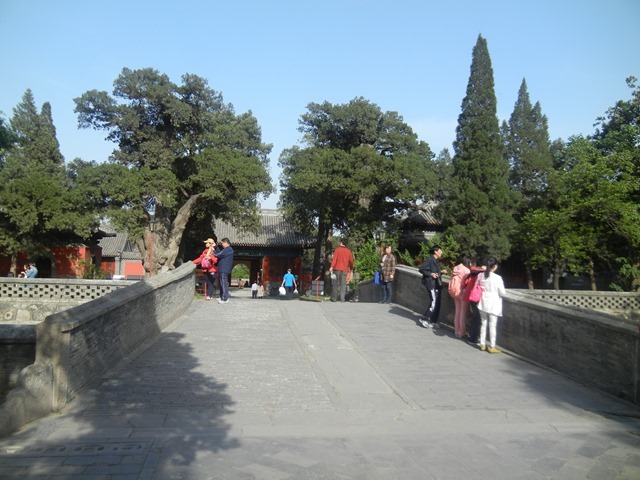 Looking at the entrance of the temple from the other side of the bridge.