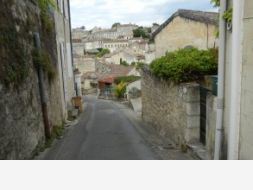 I have learned in French class that Bordeaux is famous for its wines. So right after getting settled in I was on a hunt for wine tours. Unfortunately I did not find the main tour office and their other branchese were on lunch… It wasn’t late that afternoon that I found the right tour office… However I did have a nice walk around their historical buildings for a while and took a decent amount of pictures. The tour office suggested me to visit a touristy wine village not far from Bordeaux, St. Emilion, which gives a good feel of the region. Excited, I wasted no time and set off for short tour to St. Emilion that very afternoon.

This is the only hostel in Bordeaux, and they don’t have online reservation. I calle…

trying to reserve a wine tour for the afternoon, but only arrived the information boo…

ok, back to the train station tourist info center, hopefully they are open now and I …

walked along the riverside after booking my wine tour

big plaza for the stock exchange building, which was pretty important for wine tradin…

and a little pond reflecting mirror

as soon as I walked out the train station, I saw fields of grapevines

the grapevine fields gos up and down the hills, ah so beautiful for your soul…

directions to lots of chateaus

and lots a Chinese, I didn’t know that Chinese are so into wine…

you can even buy baby vines…

some of those caves provide free shipping to US

this cellar is known to open its cellar to public

down stairs are their storage space

even more rooms down

they even got old carvings on the wall

this one is 16 years old

the owner of the cellar teaching me how to taste wine

so I crossed the street and went to this guy’s wine shop… did some tastings. He to…

came back to the “closed” cave, met the manager there and he said it was actually ope…

so I proceeded inside

they got a nice garden in the back.

hm? is this the cave?

saw some people working, so I stopped and asked

ah this is the cave, it is indeed closed 🙁

the manager was surprised that the cave was closed, they opened it – just for me

gigantic stones where the otherside has more barrels

this was previously a church, turned into a cave

time to get back to the train station, fortunately one of the workers actually drives…

once again, I was the only one at the station

and behind the hostel there was a rock climbing facility

got tired of the restaurants, started cooking something for myself