Woot!  I can’t believe its already been a month since I rushed myself to China.  I was going to move to China in August – right about now – after Hui’s wedding.  On the morning of July 9th (last month), my mom got a phone call from my aunt in hospital.

“What happened?” she sounded a little worried since my aunt hardly ever called her. “Oh, is it it serious?… Really… what should we do now….”

“Jenny!” I heard a scream, “could you look up a plane ticket for me?”

I felt God was playing with my fate  – why did my grandma feel sick when He knows that I couldn’t go back to China?  My passport was still in process and I couldn’t possibly leave the country without a passport.  I remember calling in the passport processing center four times crying, “….woould you (choke) pleeease (choke choke) gimme my passport” then balled up and wailed…

By then they told me it’s already too late to change to expedite service since my passport is already in a mail-out position.  All I could do was to wait.

Three days later I waved my mom good bye at the airport.  When I came home, I found my passport had arrived.  That night I was on my way to Houston to get my visa. 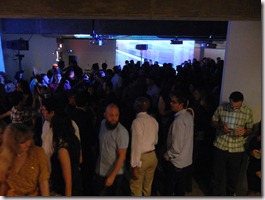 I got in BigEasy bar, where I used to dance blues with some dancing friends, on Thursday night.  I met up with Eva there and crashed in at Eva’s neat little apartment – thank god she took me in last minute, or I’d have to sleep in my car instead.  Next night we went to the Underground Steel Lounge, a party that the Museum of Modern Art hosts every month during the summer.  It reminded me of Jonovan, we came here with Hui and Mike two summers ago. 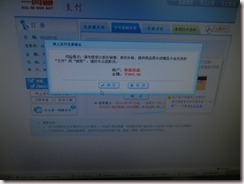 I had a rather smooth time getting my visa.  Next problem was getting the cheapest ticket that leaves within the next 3-4 days.   As an unemployed and near-broke, I spent the entire day looking for an affordable ticket.  I was tempted to try to “cut my cost” by going for a return ticket, but decided to stay with a one way for the flexibility.  The hardest part was booking a plane ticket going from BeiJing to Wuhan (since the trains for the next few days were booked up).  The foreign websites only show the full fare, and the Chinese websites won’t take my credit card.  So I dragged up my cousin from her dreams (over there is 1am in the morning) and borrowed hers… still wouldn’t work.  Next morning my mom reminded me that my uncle actually works at the airline, so we finally bought the ticket at the slightly increased price – still a discount compared to if I buy at a U.S. website.

This trip I was going through Seattle to see Hui before leaving for China.  I finally sat on the right side of the plane where I could see a clear picture of Mount Reinier.  I bet my neighbors were pretty tired hearing me going crazy with my camera clicks…. 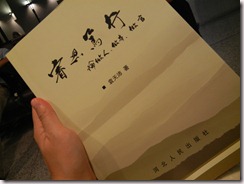 A very good family friend of ours picked me up from the airport.  My parents always bragged how successful Mr. Yuan is among all of their friends from “back in the day”.  He actually wrote two books…. 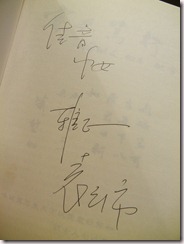 and he signed them for me – when my dad saw his book he was in love. 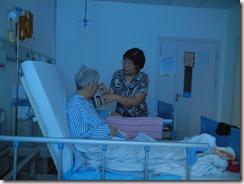 finding my mom taking care of my grandma in the hospital… now she’s there 12 hours a day, taking shifts with my uncle.  My other uncle had a stroke and had to stay home with my aunt-in-law. 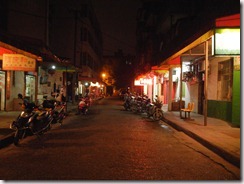 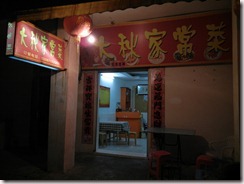 We ate at a small café for dinner one time, we had a dish and a soup that costed us 40RMB, a price looked exorbitant for a restaurant this size.  I was on the verge of not paying them anyway…. 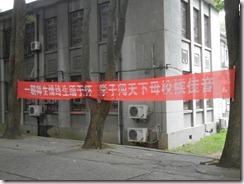 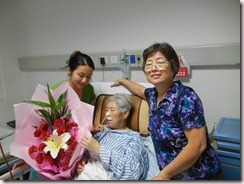 For her birthday, I bought my grandma flowers – since she couldn’t eat any cake.  But for my mom’s birthday I bought her a cake and two of us shared it with my uncle and aunt. 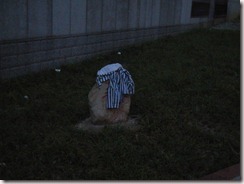 It always makes me a bit worried seeing some sort of lunatic leaving his hospital uniform out in public… where would he wonder to…almost naked? 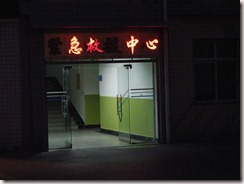 This sign lost two characters – but with the remaining four it still worked correctly.  Now it’s just a short version of “emergency center”….