From all the report I got, I’d love to visit Hong Kong.  That being said, I wasn’t overly thrilled to take out unnecessary workdays from my new job to travel.  Here is my Catch-22, my visa is expiring, but my work visa isn’t coming in till 2-3 weeks later.  So instead of dragging myself a thousand kilometers to renew my visa stay period, I took half day off in effort to extend my visa stays: 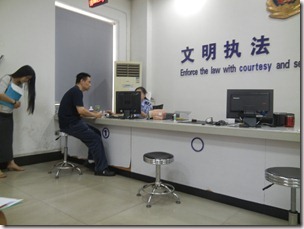 After two hours of traveling across the town – including my dad almost abandoning me while arguing over the directions of the place – we finally got to the immigration police office.  Despite the gruesome line with quite a few people in front of me, this guy in the picture decided to cut the line for himself.  Like that wasn’t enough, he then proceeded to take his sweet time with the immigration folks.  By the time it’s my turn, I hurriedly got myself in front of the inspector.  Thinking back, I pretty much gave up before even opening my mouth.  “If you don’t have important situation, don’t bother me.  I am very, VERY busy as you see here.”  He yawned as he spoke, seemingly upset at my presence.

“Sir, I’m here to extend my visa duration days.” I told him.

“Write me your Chinese name,” he gave me a pen, “now don’t give me trouble by writing a different Chinese name with the same pronunciation.”  He demanded like I was always a liar.

He look over my name, then stroke a couple keys into the computer, “You need to go back and check XX.  I told you to not bother me if you aren’t prepared, and now you are just wasting my time.”

It doesn’t take a smart guy to figure out how difficult it is to deal with Chinese immigration folks, so I decided to treat them the same way as how I treated the INS in the States – avoid as much as possible.  With this logic, the only other option is Hong Kong, and I had to get myself to the border as quickly as possible since my visa days are getting less and less.  I remember getting to the HK border and the patrol looked at my passport, “why are you in China?”

Then she nodded, as if she knew my real situation as the rites of passage among all foreigners in China – despite the fact that I was actually born there.

After traveling through beautiful southern China countryside with clouds circling around endless rice padding fields on rolling hills, I wasn’t exactly thrilled to join the crammed narrow streets with endless sky scrappers towering over my head. Hong Kong, as fancy and glamorous as I have seen it on TV, is not as easy going as I have thought. Stress, indeed, was the first impression when the thick air occupied the streets oppressed upon me. I was glad to catch another American while crossing the border. He guided me as I bewildered myself absorbing the first sip of Hong Kong and its immenseness. 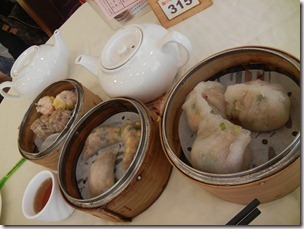 I would love to share some pictures from our hostel’s last night out, but I didn’t bring a purse with me so I wasn’t able to hide my camera safely.  But I did bring my camera this morning to get grab some glimpse of my first set of dim sum in HK. 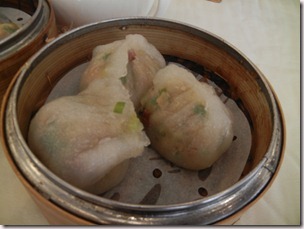 These southern-style dumplings are really good.  They are huge and their skins were made of sticky rice. Yum! 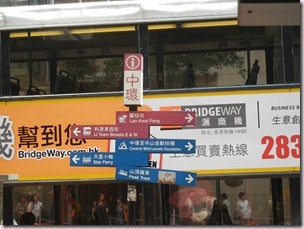 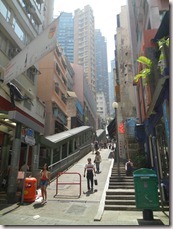 “Go to Central” so my fellow hostellers suggested.  Right after I got off the metro in Central I saw the directions pointing to all sorts of interesting spots.  I really wanted to check out their world’s longest escalators.  If I’m not wrong, the middle sign looked more like it. As usual I quickly became a distracted victim by the endless shops on both sides of the street.   This results me zigzagging my way through the busy main streets whenever the grass is greener on the other side, absolute not ashamed of my horrible J-walking skills.

Eventually, I got to a set of escalators with tourists clicking pictures here and there.  This must be it. 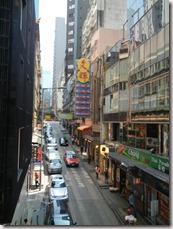 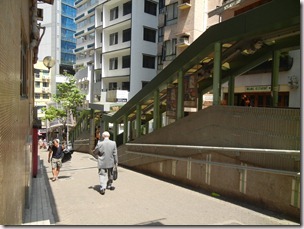 I was hoping for one long, looooooooong escalator going up to the sky.  It turned out the world longest escalator is actually a set of normal escalators connected by small walkways going up the mountain on Hong Kong Island. 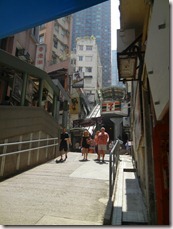 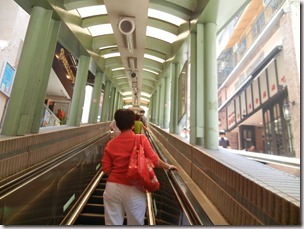 There were all sorts of interesting shops along the escalators, ranging from expats restaurants to small antique baazar.  Seven Eleven, a big convenience chain from my beloved Dallas, Texas, also snatched up a great spot to draw its visitors. 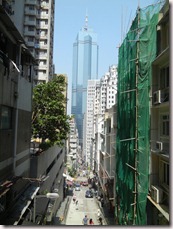 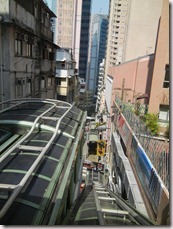 Looks like the entire set of elevators is covered, so visitors can enjoy effortless climbing up rain or shine.  Going down the mountain, however, is entirely another question.  Since there is no escalator going down – at least not that I could find when I was there.  Sounds like the Chinese here figured that going down is a lot easier than going up, hence no elevator is needed, and behold, you could also take some rain with you when you are running down since the stairs were not covered!  In the end, it would be a long way down if you live up there.  Fortunately people live up the hill are usually rich folks, so they got their cars when they really need it. 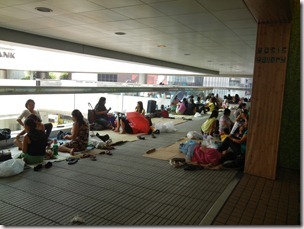 At one point I saw a lot of women from Southeast Asian countries sleep here.  I hope they are ok, but they looked like refugees…. 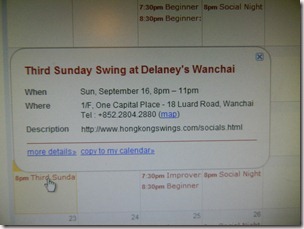 I really got no plan for Sunday night, so I went to see if there is any swing dance in HK that night.  I lucked out – they only have one weekend dance every month and it’s at every third Sunday of the month, and today was the third Sunday of this month.  Even better, the location is only one metro stop away from my hostel. 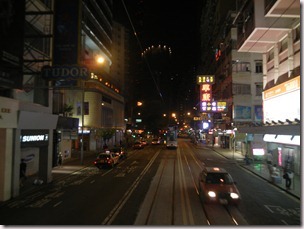 I met Ralph, a British chemist visiting China, in my dorm.  He’s also leaving at the same time tomorrow morning.  So we decided to check out the dance place together and have some drinks there before heading back early to get ready for the trip tomorrow.

We got to the bar but we couldn’t find any dance in the bar, so we thought we got to the wrong bar.  Then the bartender pointed to the back of the bar, and following his direction we found some dancers in a private backroom.   The swing dance place was a huge mistake, forget about dancing and hanging out and meeting the locals, you are locked away with a bunch of foreigners who don’t know much about swing dancing…. Maybe because the bar owner got embarrassed and put them there?  I felt quite embarrassed as a swing dancer and we left there quickly. 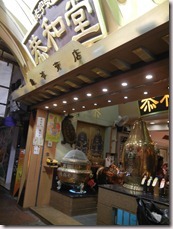 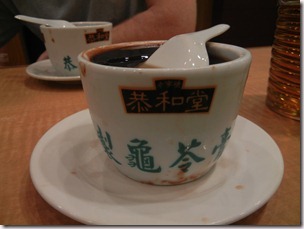 After several other disappointing bars, we decided to try out this tea place we found around our hostel.  We were taken by surprise when we found out those were actually herbal jellies.  “The jelly is made from turtle shell” the smiling shop owner explained earnestly.  Now how do you make jelly out of turtle shell? 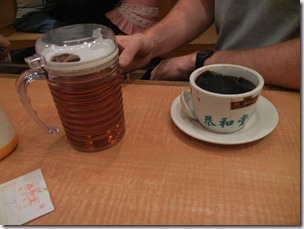 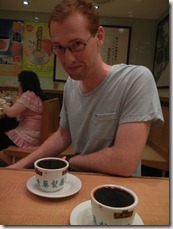 It tasted bitter at first, and we had a hard time finishing our jelly/tea.  Then the shop owner supplied us some honey.  Now that’s much better! 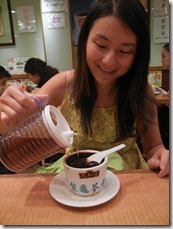 Looked like I know what I’m doing…. honey, and more honey!