Though I am one of those few folks prefer the endless prairie in Mongolia than a bustling world-class city, Hong Kong, I had to go to Hong Kong for my work visa.  While waiting for the trains in Wuhan, I found out that they also need to bring in my medical record for my visa.  I only got 2 hours to make the round trip to my office – during the rush hour. The taxi driver simply told me this is a hit-or-miss.  Since missing my train not only meant a wasted train ticket, I will also end up overstaying in China, that’s 100USD per day… so I decided to turn around to the train station and resolve it when I get to Hong Kong.

Coming back to the train station, I bumped into a rather overly-made-up English-speaking girl sitting with a Wuhanese.  At first I thought they were a couple, then I heard they were also going to Hong Kong.  So I told them, in Wuhanese, that I’m also going to Hong Kong.  The Wuhanese boy immediately asked if I could help this non-Chinese-speaking gal to get to HK.  I was quite surprised (I mean… train station, though it is Chinese, it’s still pretty straight-forward to get around)…..

When the Wuhanese guy left, soon enough I found out that she was also going to HongKong to get her work visa – what are the chances?  So the two of us stuck together all the way to the Chinese embassy the next morning.

Since I’m still missing my medical record to apply for the visa, the HR lady told me that she will scan it and send it to me via email.  Little did I know this little medical record cost me a whole day to straighten it out.  With very limited public internet, no telephone connection, and very little knowledge on places to print out documents, it doesn’t help that her copy was either incomplete (the stamp was cut off), or too blurry.  We had to go back and forth three different times, and I literally ran around the city looking for a coffee shop with reliable and free internet, only to realize that there is none.  It’s Hong Kong after all, nothing was free, especially for visitors.

By the time I landed on a good copy of my medical record, it’s already 3pm.  I only got an hour before the embassy closes.  Dragging around the city a huge luggage and a computer, I was simply exhausted after the whole ordeal.  So I called a taxi to save me a 10 step walk to the embassy, and I should have seen it coming…. This guy jumped at the opportunity and gave me a “tour around Hong Kong”… what should be a base rate trip turned out to be twice the amount… I refused to pay him that, but still gave him a very generous amount for his base effort

When I get to the embassy, feeling lucky that I could still get in its door after the “tour” that I did not request.  The embassy lady, a much nicer one compare to your average embassy ladies, asked, “do you speak Chinese?” Now, in Houston, this is a trick.  I was told over and over again, DO NOT SPEAK CHINESE in Chinese embassy.  They hate all visitors and will give you a lot of questions if you speak their language.  It’s better to stick with English so they could shut up and work.  Well, apparently, what works in Texas doesn’t work in HK.  She shook her head, then told me that I need an additional document….

Of course, by the time I get the document, embassy was closed.  I had to wait till the next day to send in the requested document.  I got there bright and early, and they happily took in my document.  “Eh, but we need your hotel number.”  Hotel?  Then looking at my application, “Hong Kong Hostel”.  Oh yeah, the gentleman checking the application told me to put a hotel, but I haven’t stayed there yet…

“Eh, I don’t know Hong Kong Hostel’s number” I was clearly half-freaked out, hoping that they won’t ask for my hotel reservation, because I got none.

“Well, we just need a contact number, in case, there is something wrong with your application.” she smiled.

Something wrong with me application?  Are you telling me that when you went through my application now, I’m still not done?……

Fair enough, I gave her my couchsurfing host’s number.

An hour later, I got a email from couchsurfing host – I’m still not done, they want one more document.  Though this time I was glad that I gave the embassy a working phone number.

After two “practice runs”, this time I knew what I was doing.  I researched some more, organized the document that they wanted with the HR lady, and handed it in first thing in the afternoon, not wasting a minute.

Which also means that I’m staying for the weekend, unexpectedly. 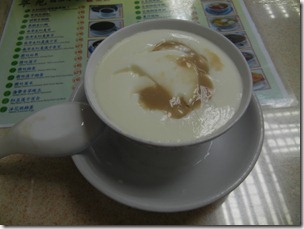 I waited for my couchhost, who works at a very nice department store, to get off work.  Then we went to this porridge shop to get some of those porridges.  They got all sorts of funny porridges, lotus seeds, eggs, milk, etc.  This one is mixed with milk… 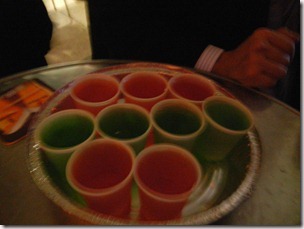 Then we hopped around bars for the lady’s night free drinks with her friends.  The girls are very friendly with me.  After running around a couple places, we bumped into a bunch of guys in the elevator and one of them challenged the guys to take us out, and they did… 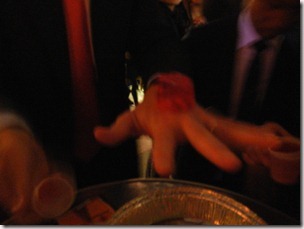 interesting way of taking a jelly shot, squeeze it out onto the back of your hand, and scoop it up with your mouth…. 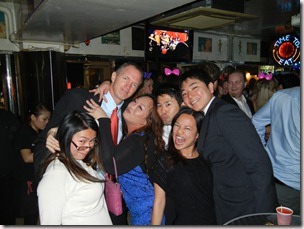 the guys and the girls… They seemed to work in the same company, a translation company.  Funny, I work in a translation agency too…  One of the sales guy told me that they work with some 100 languages. There were some Chinese, Japanese, Koreans, etc. 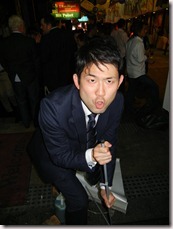 A drunken Japanese… he was so drunk that he grabbed a random fixture and start following the background music…. 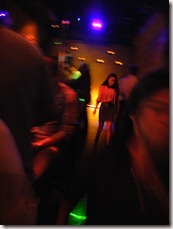 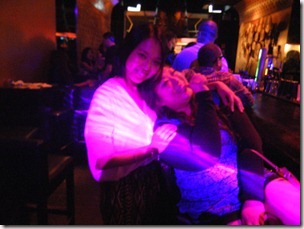 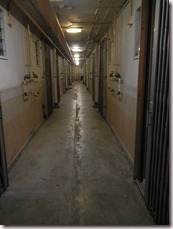 My couch host, Wing, lives in a tiny one-room apartment outside the city center.  Walking into the gigantic apartment building, I felt like walking into an 80s Hong Kong movie.  The hallway in those 80s movie always looked like this, but I never thought they were real…. 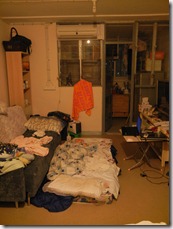 That was her couch, I get the upgrade to a real mattress.  Then I realized on her couch page she said something about that – I could sleep on the couch or the mattress, and she gets the other.  How sweet! 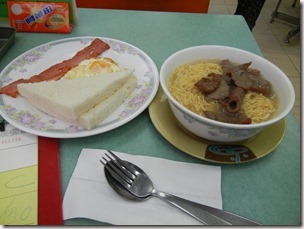 Saturday morning, first long day of waiting for my visa.  I had the biggest breakfast in Hong Kong, all for 20 HKD (3 USD) – a combination of western bacon-egg-bread and eastern beef ramen, just like Hong Kong itself. 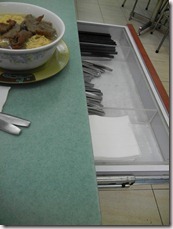 …and you don’t need to run around on a quest for your utensils, they are all in a drawer under the table.

my couchhost lives 1.5 hour away from HongKong center, but the commute along the Golden coast of HK is probably one of the most breathtaking bus rides so far.

and on the other side of the bridge is the city itself. 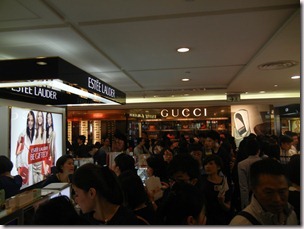 Hong Kong is a city known for cheaper make-up imports, and at the end of the year, they usually hold a few sales… Of course, if you are interested in buying their make-ups on one of the end-of-the-year Saturday, you got to battle through many other interested able-bodies. 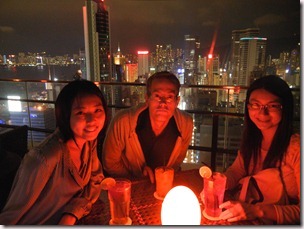 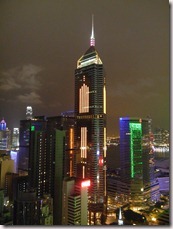 Wing had a dinner with her friend that night.  After the dinner, we went for a drink.  They decided to show me the famous Hong Kong night scene (the first picture of this diary entry), and the tallest building in the city.

Sunday, after lunching with a family friend, I decided to wonder around the city, and found this mosque in the middle of this busy Asian city. 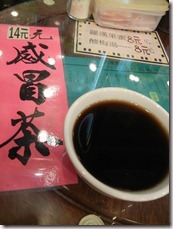 I was recovering from a cold before coming to Hong Kong, and while I was in Hong Kong I found these “coughing teas”, so I ordered one, except when I sat in the tea shop, I found some other interesting teas as well…. 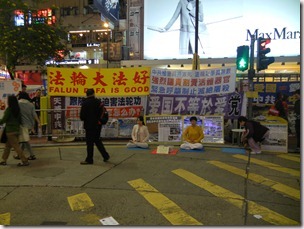 These FalunGong groups are labeled as a cult by the Chinese government and strictly banned in China.  But in here, with freedom of speech, you could see both pros and antis fighting fiercely for their rights….  These people are practicing FalunGong in the middle of the street to show people that this is just another religion…. I have no idea why, unlike Christianity and many other religions, is this religion went so political… 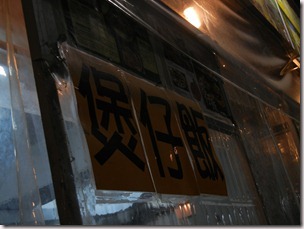 We went to try a local delicacy, BaozaiFan, or rice cooked in these thick, slow-pot looking pots. 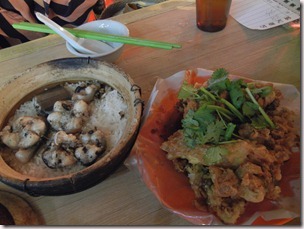 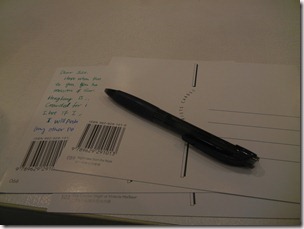 To write some post cards while eating at McDonalds, I asked the waitress for a pen. After some 10 minutes, she came back with a pen, only that it was obviously broken.  I could not find the waitress who gave me the pen, so I asked another waitress for another pen.  She looked at me perplexed, couldn’t understand English nor Chinese, kept telling me “no”, then left.  Then the lady who gave me the pen came back, I told her that her pen was broken, “well… do you still need it?” she asked…  no, it’s broken, I can’t use it even if I need it…. So I simply had to give up her pen.

Then 10 minutes later, she gave another, working, pen.  So much for the “language barrier”.