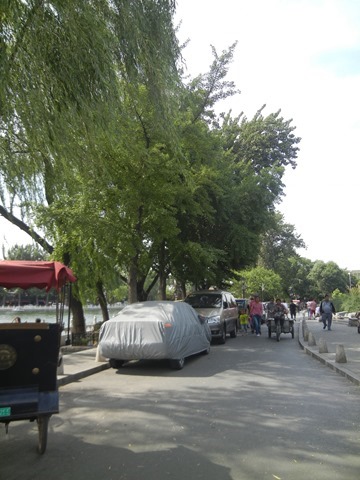 Haven’t really visited Houhai (or the garden in the back of the Forbidden City) in a long time.  This is actually one of my favorite hangout places in Beijing, and I’m very sure many locals are alike. 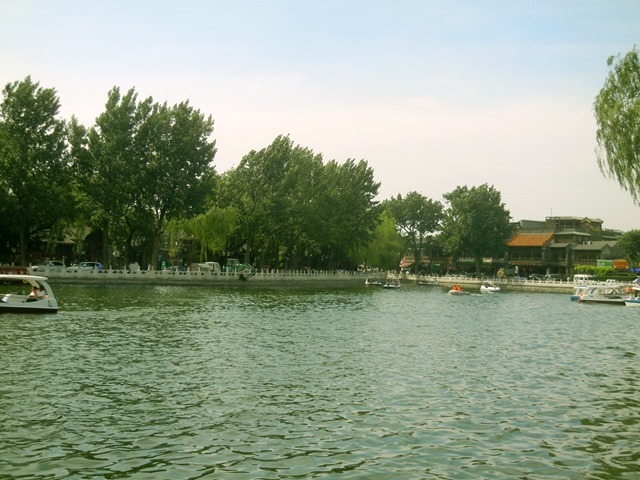 Houhai means “back sea” in Chinese.  Ancient Chinese royalties have no concept of “sea”, so they dug a huge lake in their backyard and called it a sea. 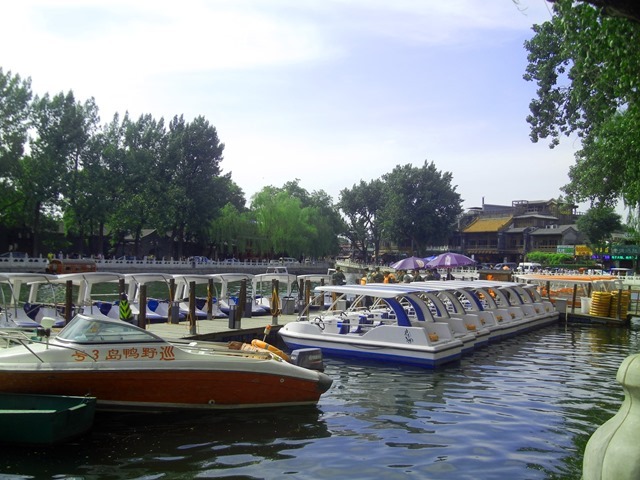 You can row a boat here on a pleasant day. 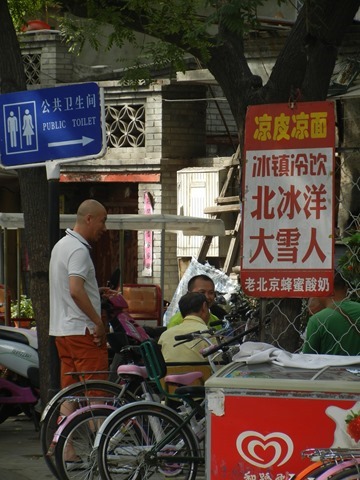 Or eat all sorts of interesting local popsicles and cold beverages. 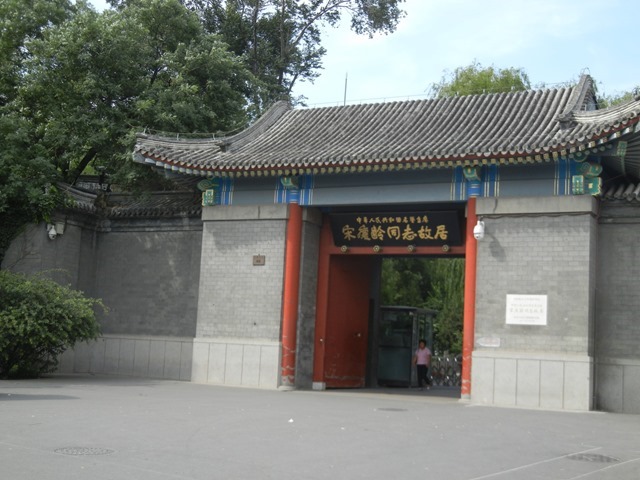 Soong Ching Ling, Mother of China, used to live around here. Her old residence is open to public. 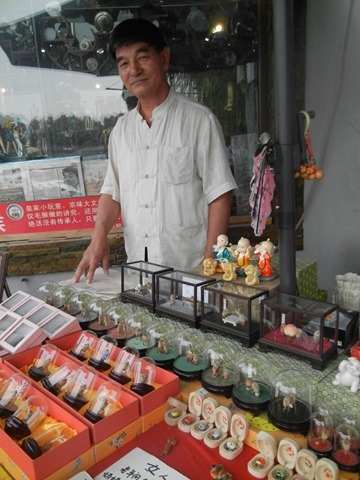 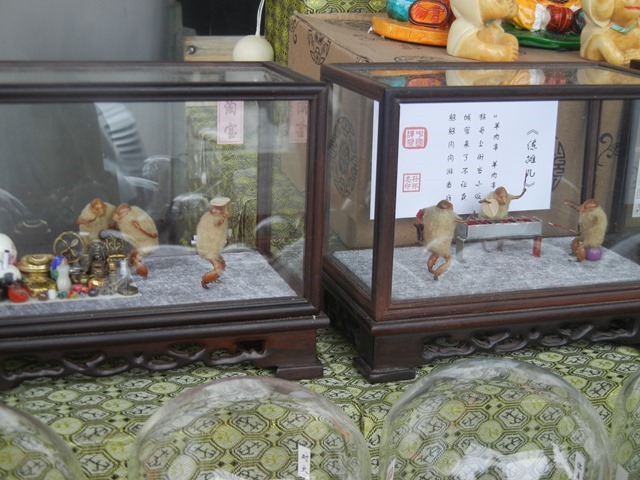 The monkeys were made from insect shells, as insects change shells, their old shells are used for monkey’s body. The monkeys were decorated with fir and other miniature arts, a favorite past-time of the locals. 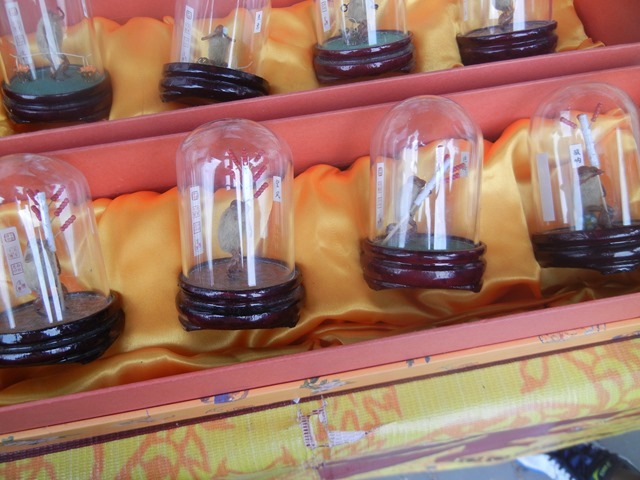 Monkeys can tell a story like in this set: 1. the monkey is selling a set of snacks; 2 then he saw chengguan (city patrols on illegal stands); 3. he ran away with his food; 4. because he couldn’t sell all of his foods, now he had to eat them all by himself. So he sat down and ate the remaining foods.

Moral of the lesson, study hard, so that you don’t have to set up an illegal stand and dodge the chengguan everywhere. 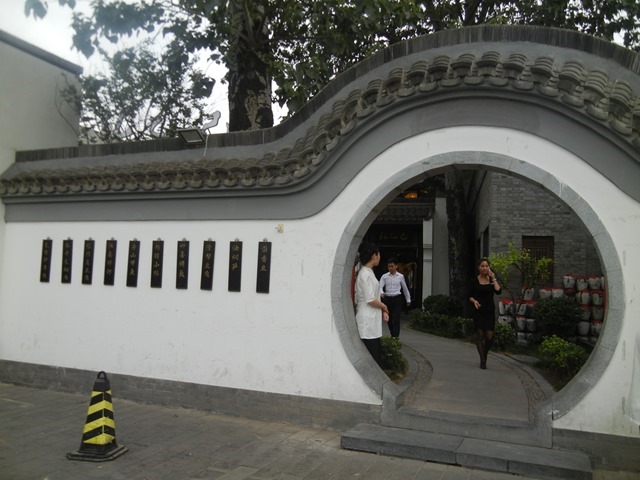 Houhai is also a place concentrated with fine dinning.

Another dock  beautifully set by a restaurant. 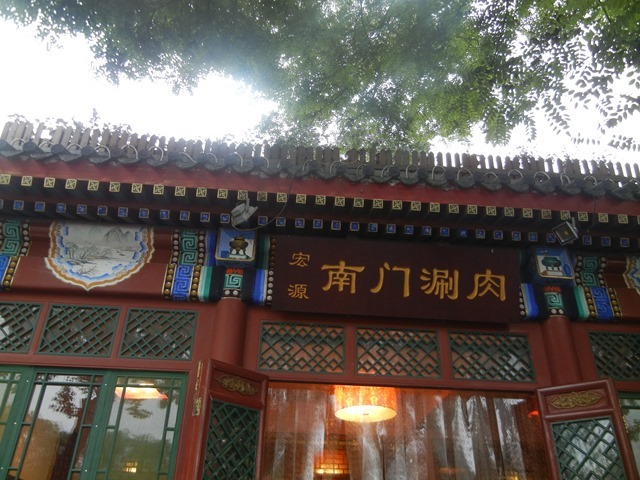 We decided to eat local hot pot at a centuries-old local restaurant.  Apparently this restaurant has been here in Houhai for at least a 100 years. 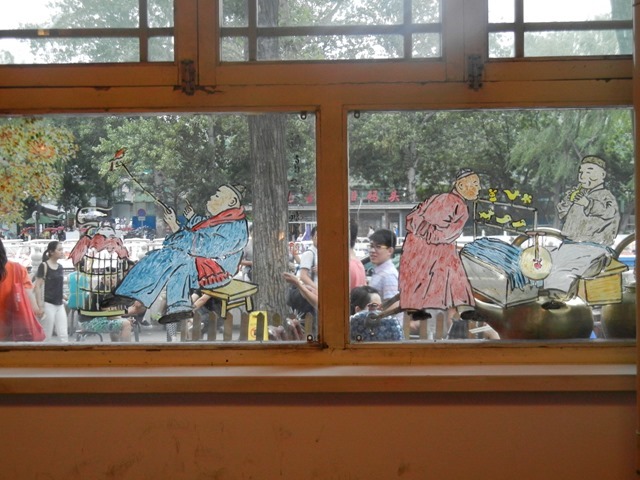 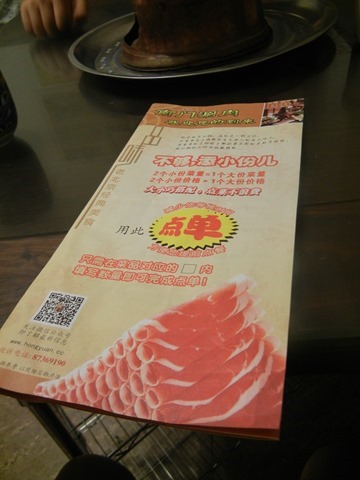 Menu reads: If not enough, you can always add small portions. 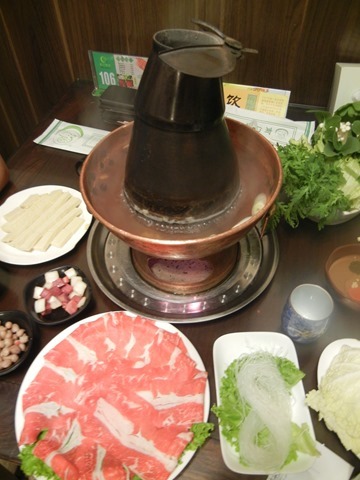 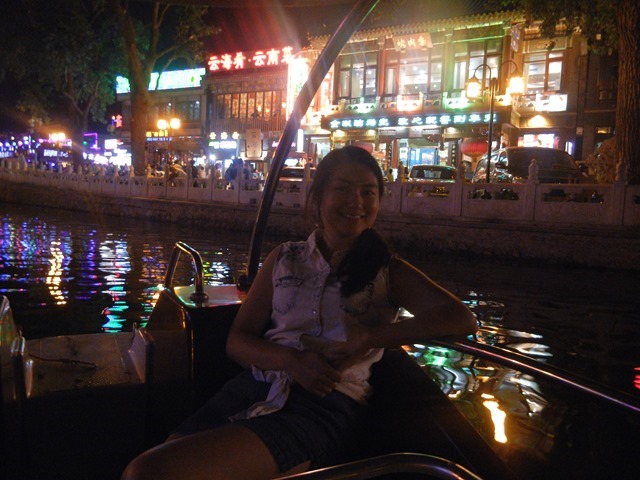 After dinner, we decided to burn our extra fat by peddling around the lake. 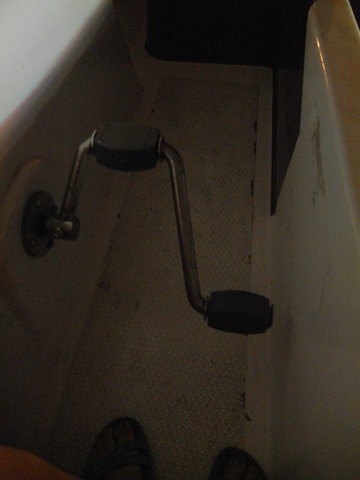 We rented a peddling boat. 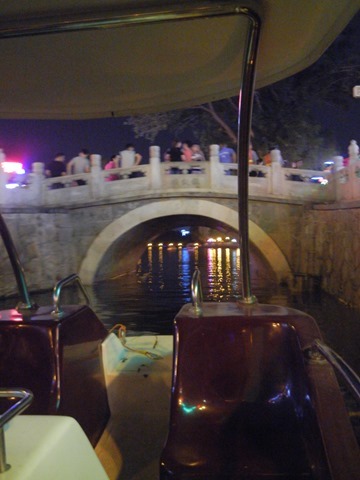 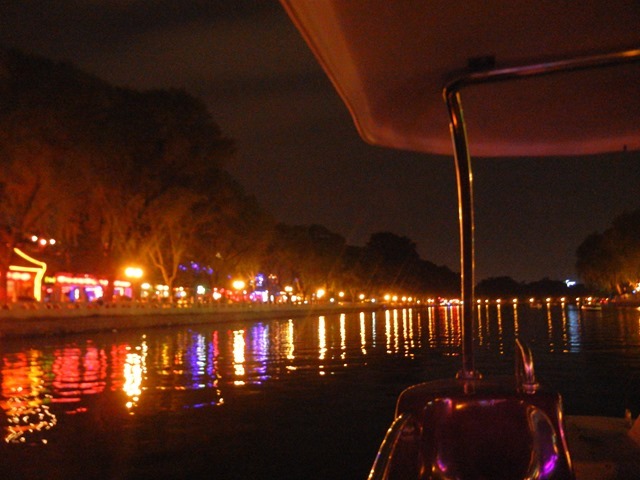 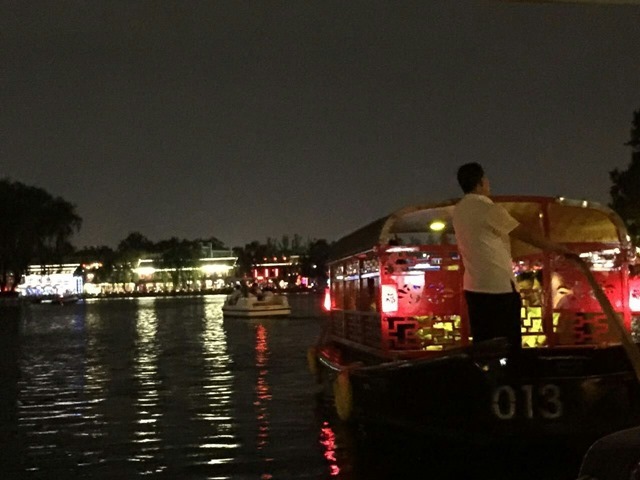 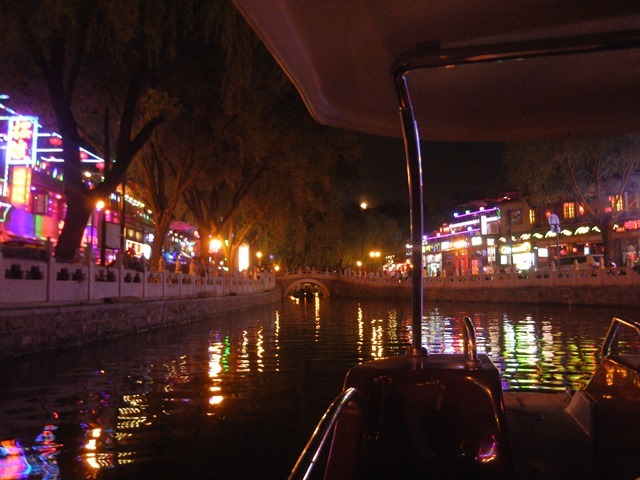 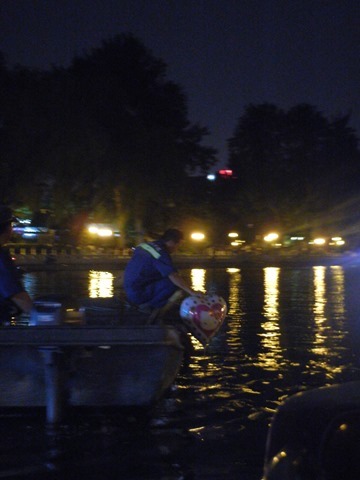 Lake cleaners hard at work – I do not feel sorry for him picking up a balloon as a trash. 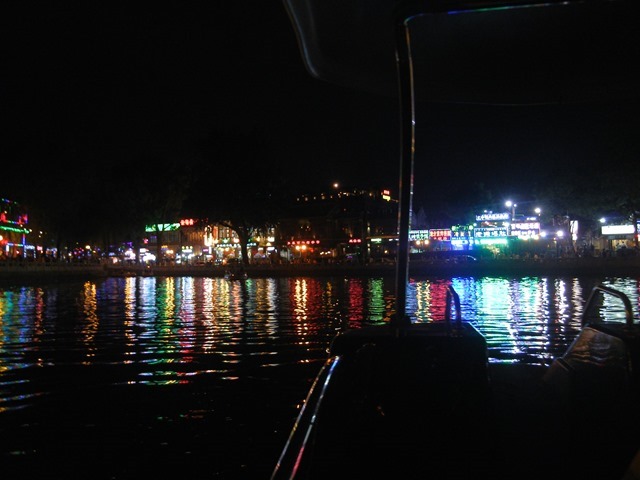 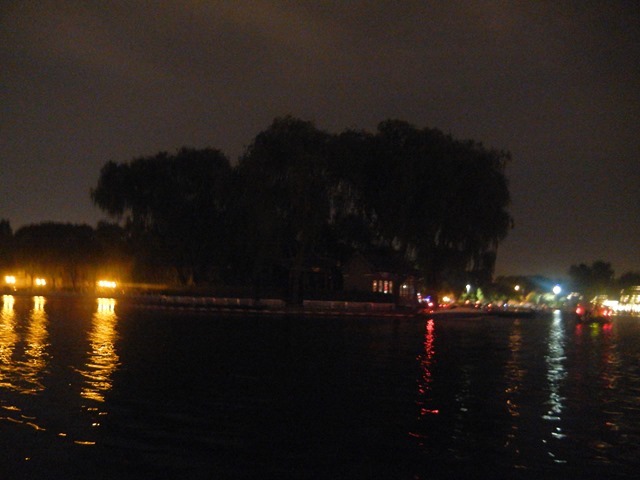 Little island in the middle is not allowed for rest, a patrol boat parked around their to prevent people from getting onto the island. 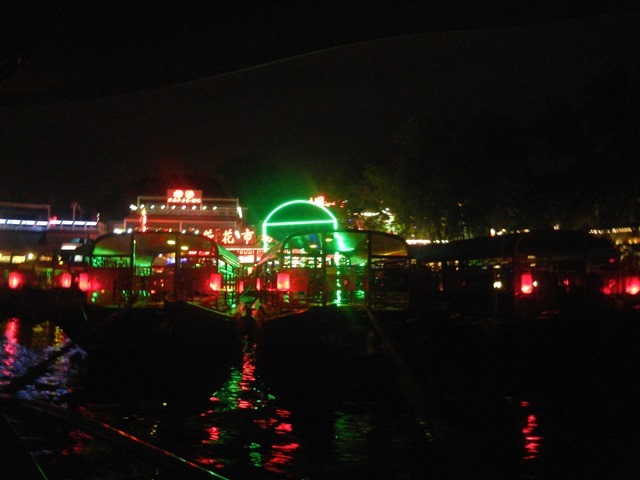