We were dropped off at a junction after Huanglong adventure, there we hitchhiked our way to Songpan.  The town is known for its thousand years of history, where a small section of the original wall still stood.

David at Emma’s Guesthouse received us. His family is about one of the very few who spoke English.  What strikes me the most is the way he smiles, not a lot of Chinese, especially those from smaller places, know how to smile. Many traditional Chinese families in China emphasize the Confucius idea of sobriety.  Hence without any Western, open influence, those people regard smiling as trivial and silly, and weren’t brought up smiling.

The reason David learned how to smile is from his brother who married to a British girl.  Apparently the girl also passed by here years ago, fell in love with the boy here and eventually married to him.  David then went to English and visited his brother for a year before returning to China. 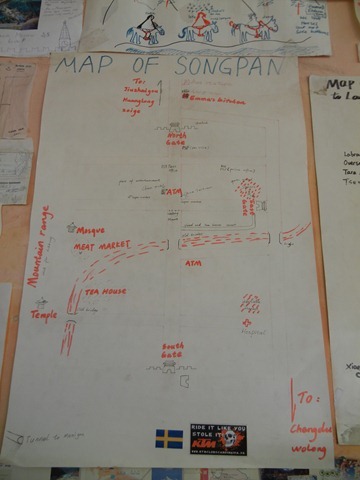 David told us since Songpan is so small and simple, there is no so-called official map, let along an English version for tourists.

“But we got one on the wall,” then he proceeded explaining us about where to look for interesting things. 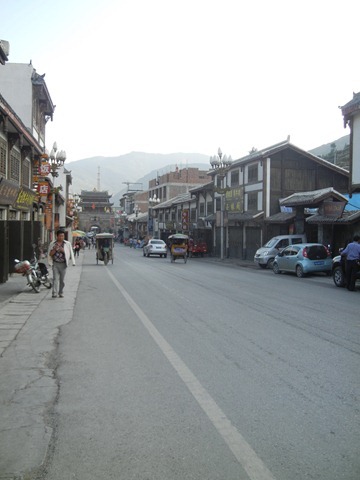 The guesthouse itself is just a couple hundred meters from the old wall. 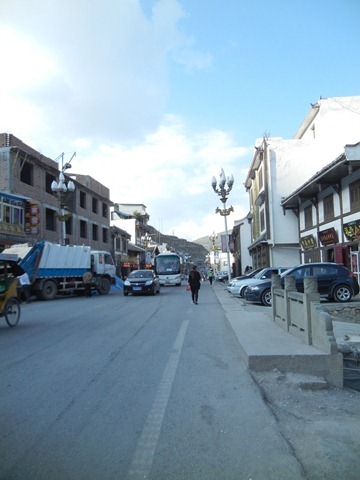 The city has just one big street, where it goes through the old city.  There are another two old cities around the area, but due to our shortage of time, we could only visit the main one. 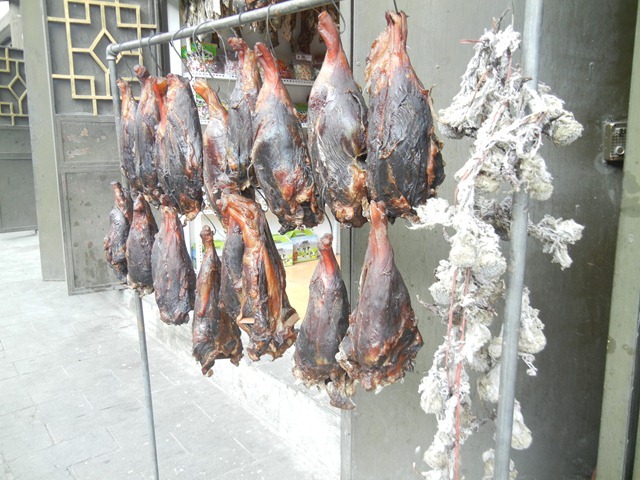 Not sure what they are selling there… 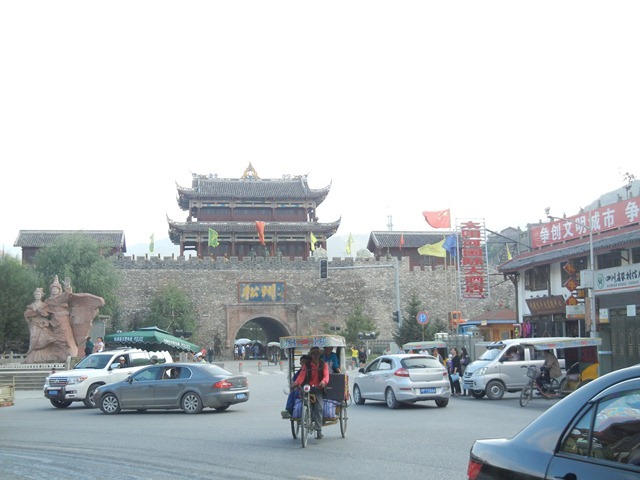 Within minutes, we reached the old city wall and the gate.  The statue on the left portrays a couple.  They are suppose to be the Han Princess Wencheng and  her husband, a Tibetan prince, symbolizing the unity between Tibet and Han. 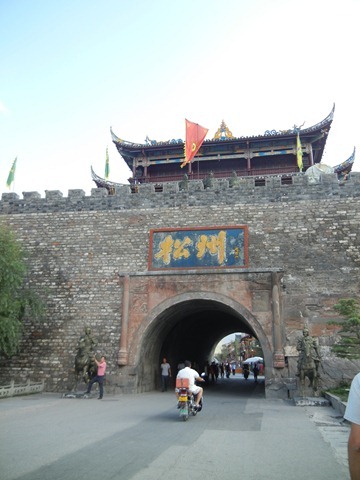 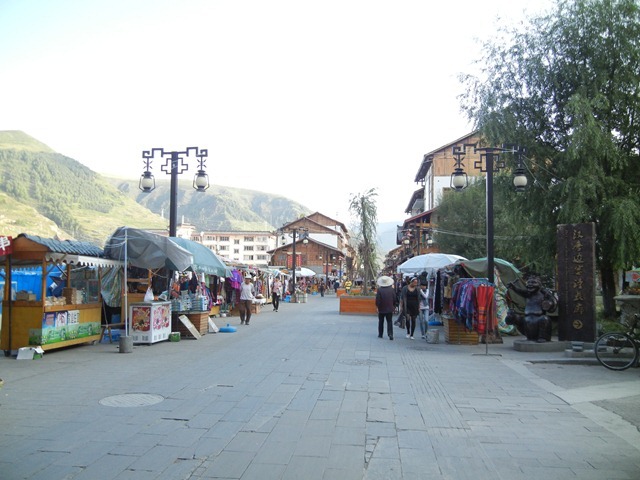 Strolling into the old town, we found a very commercialized shopping street. 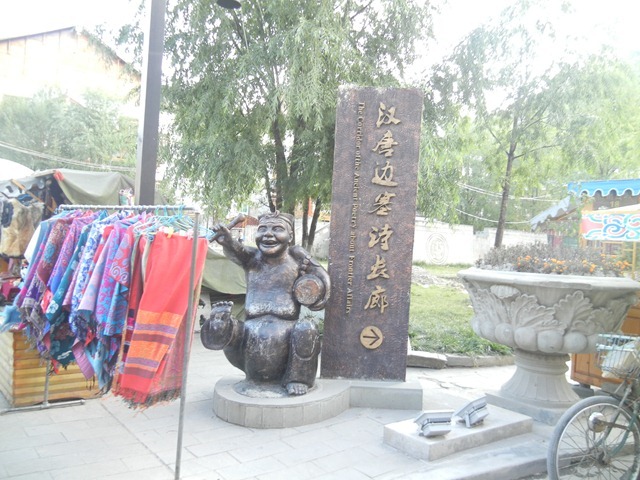 A statue with the name of this street. 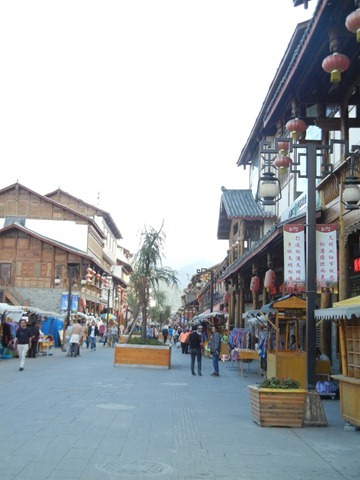 A bit too modern for the old town. 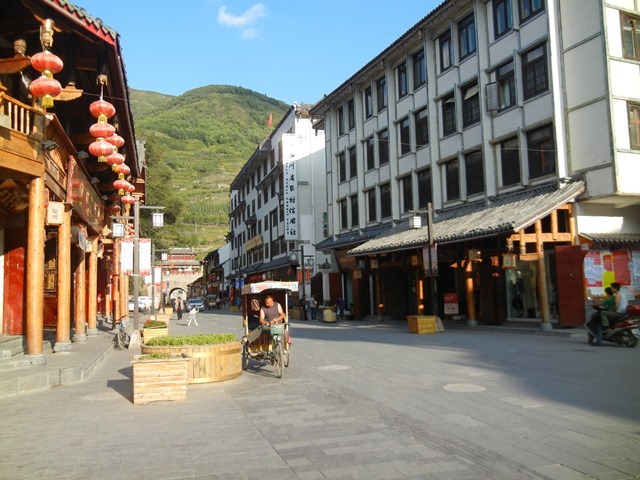 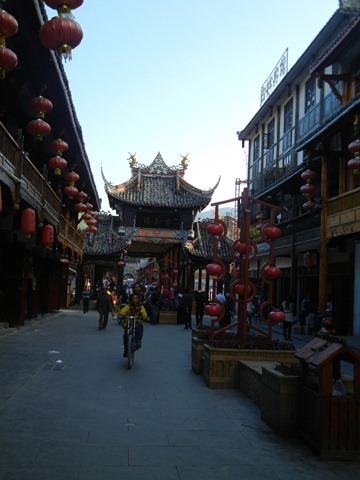 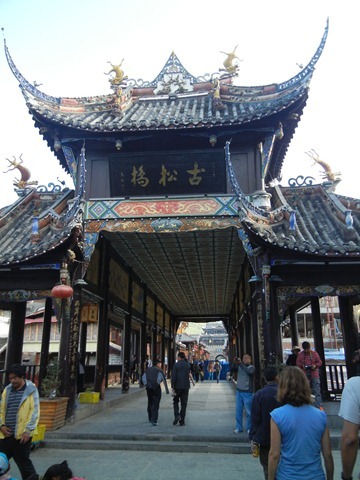 A bridge crossing the river. 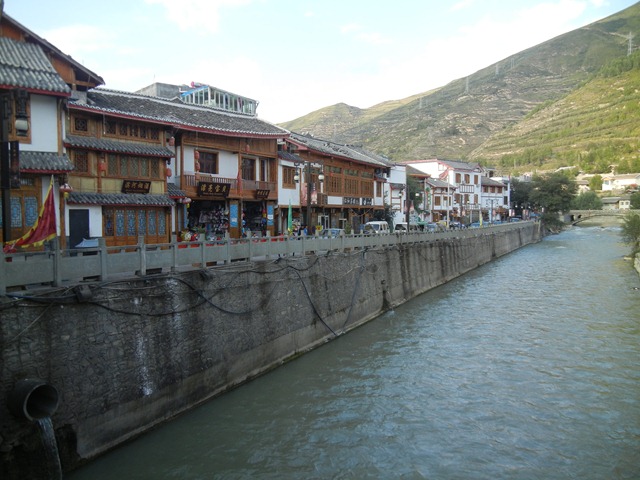 View from the bridge. 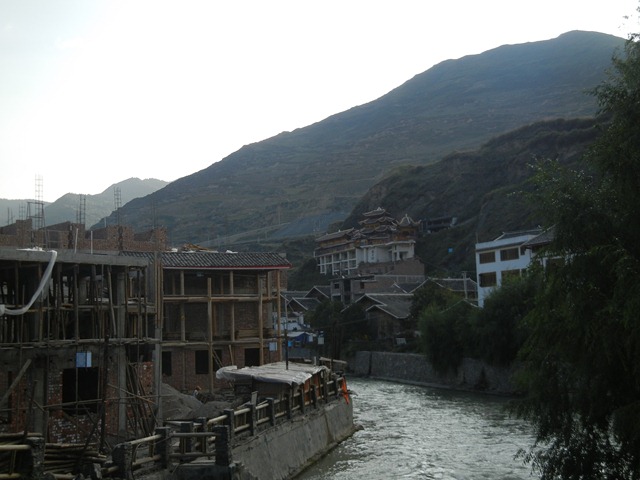 A lot of things are still under construction. 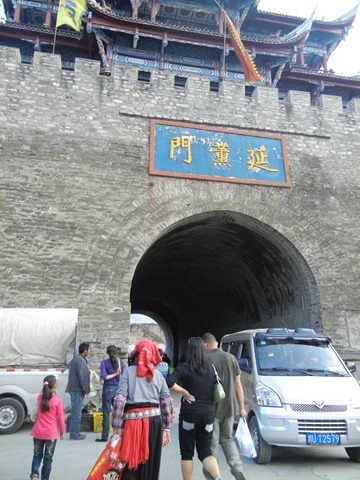 The old town is quite small, we got to the gate on the other side in about 20 minutes. 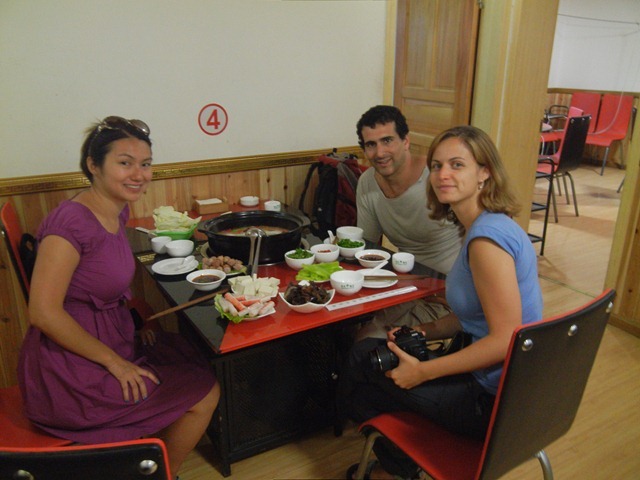 We had a yak pot that night.  It’s like the hot pot, but the soup is actually yak bone soup stewed for 24 hours. 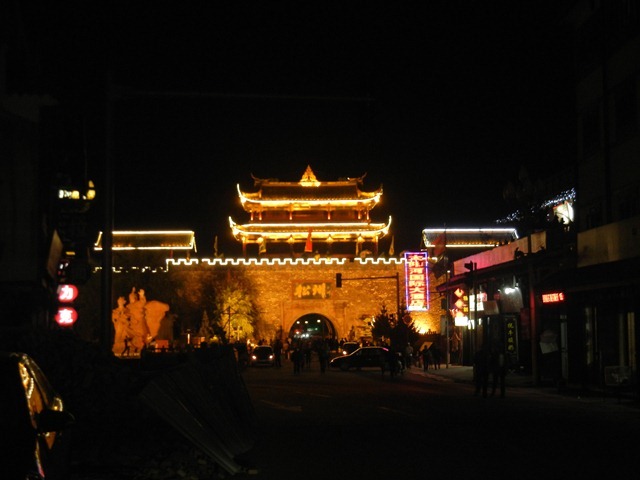 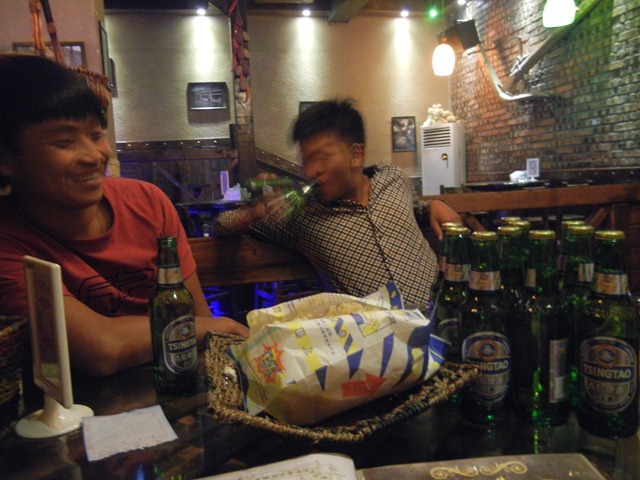 David (left) invited us to have a drink with his friend that night. 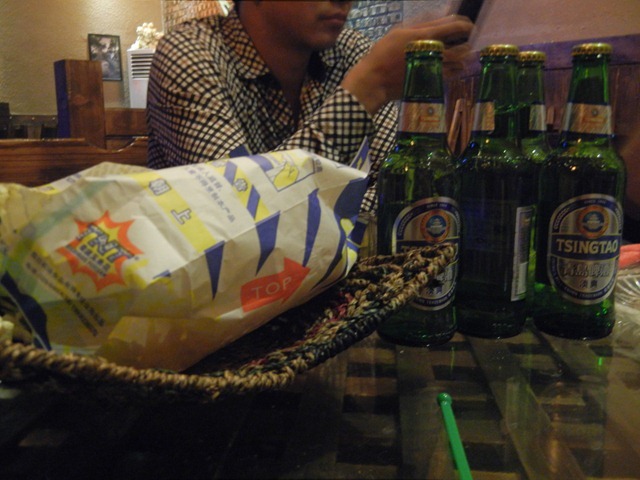 The guys ordered a dozen beers and finished them in about an hour or two, while I introduced pearl tea (though not very authentic) to Noa. 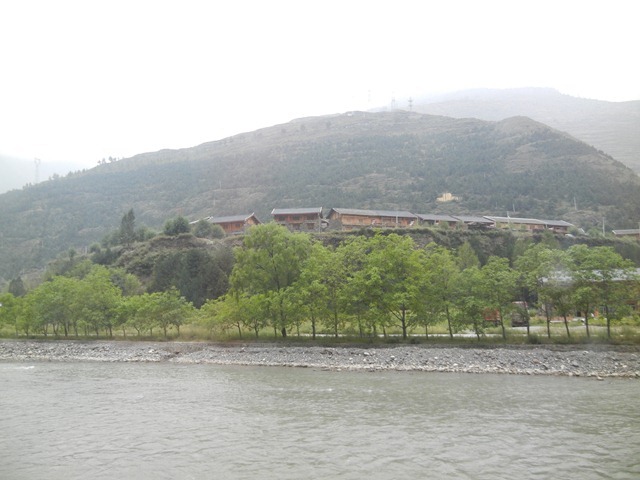 Next day we took a bus from Songpan back to Chengdu, I felt a bit sad leaving all these idyllic villages by the river. 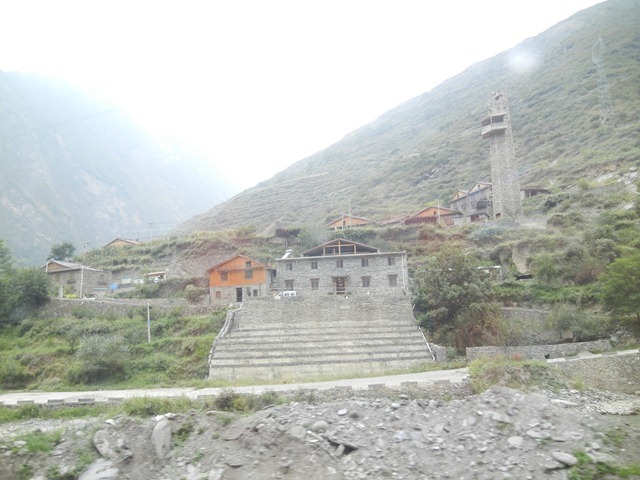 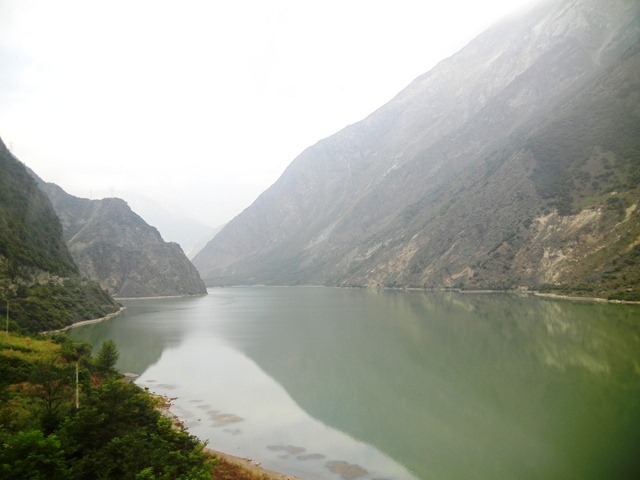 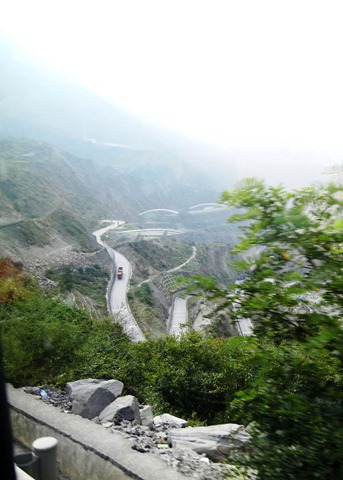 This is probably one of the most memorable places in between Chengdu and Jiazhaigou, where the car has to follow this wildly intertwining road up the mountain then down the mountain.  Reminded me of the high altitude pass between Santiago, Chile and Mendoza, Argentina while traveling in South America. 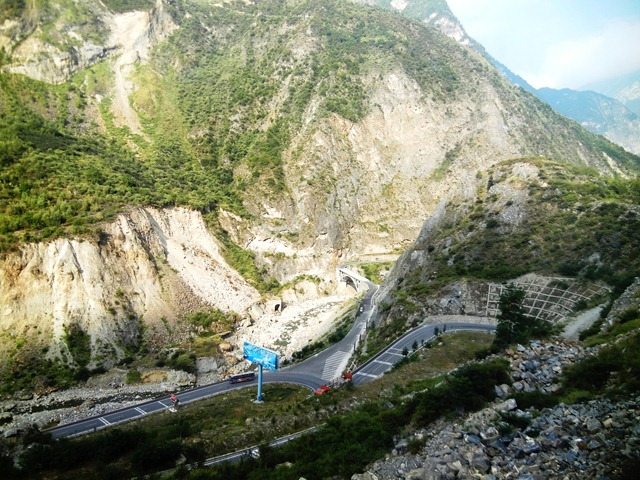 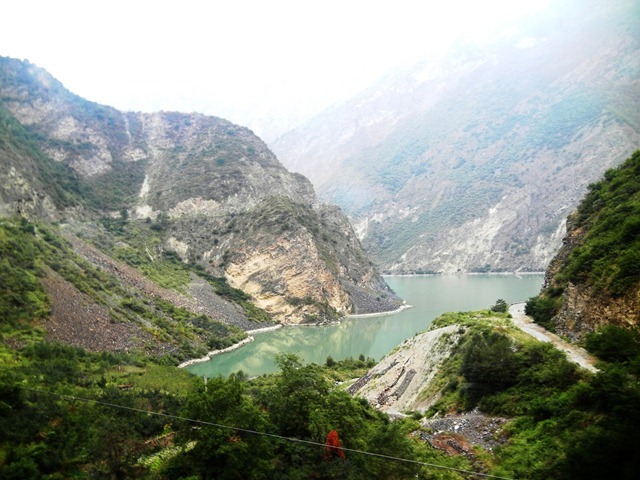 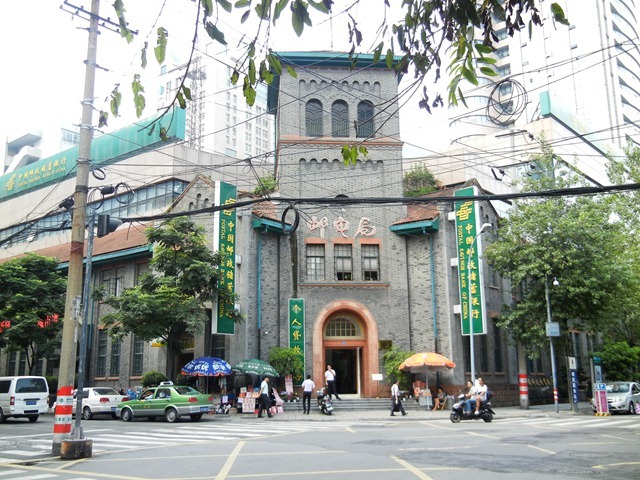 I found one of the guys I met at the hostel a week ago still at Chengdu, we decided to hang out together before my flight back to Beijing. He told me that he found out where the old post office is, and it wasn’t too far from the hostel. 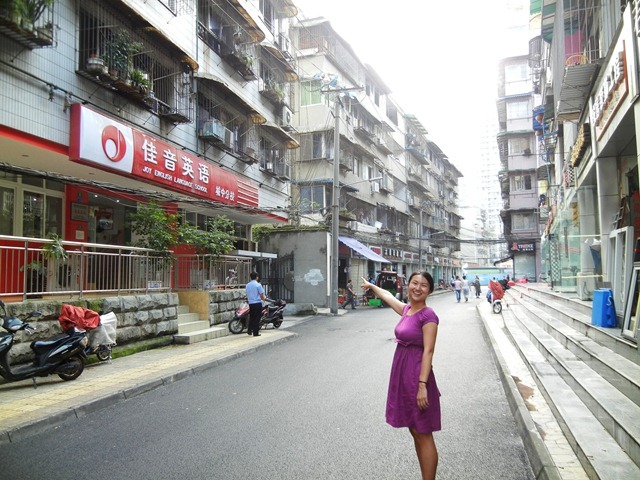 Then we accidentally passed by an English learning center shared my name – Jiayin English, though it was translated into Joy English.  Yeah, I totally owned that place.