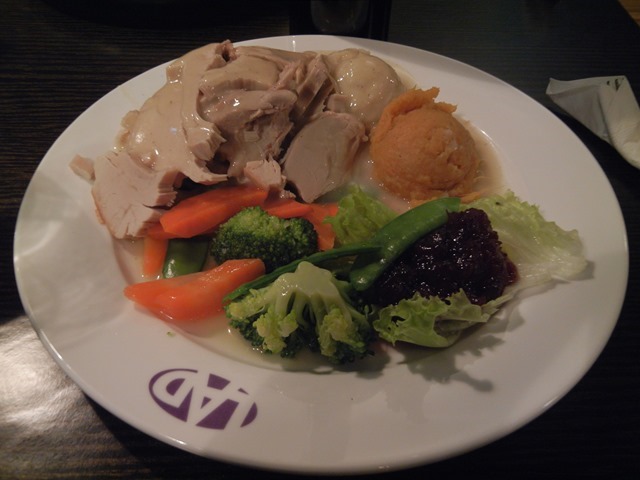 The best Thanksgiving meal I have ever had was with Cory at Lily’s Restaurant north of Sanlitun.  It tasted just as good as it looked. 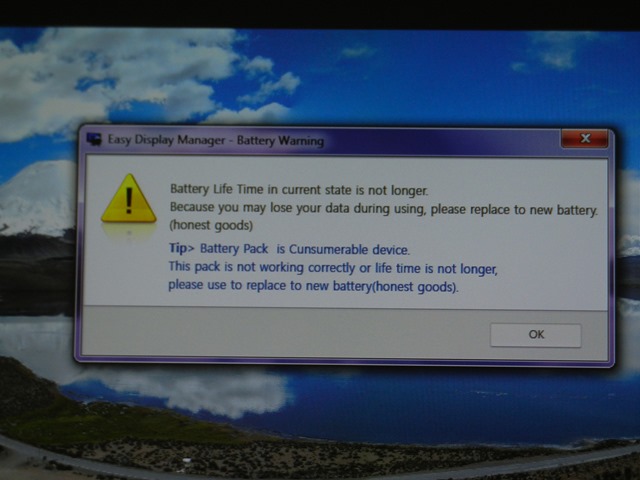 Bad English on my computer – BOUGHT IN USA!  Honest Goods…. 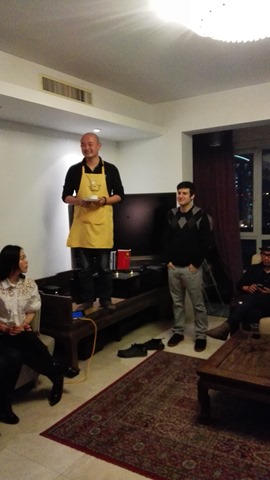 Moishe’s House (a Jewish organization open to public) hosted its own Thanksgiving dinner.  The cook of the catering service, FatFace, had his birthday on that day. 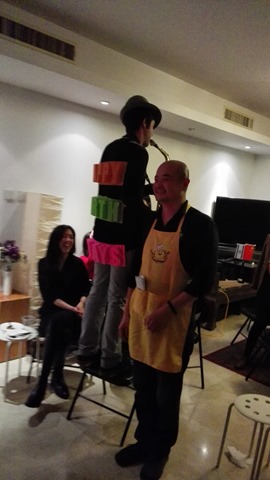 So Jaime, one of the residents of Moishe’s House played him a song by saxophone .

Me with Sally, one of the cooks for the dinner 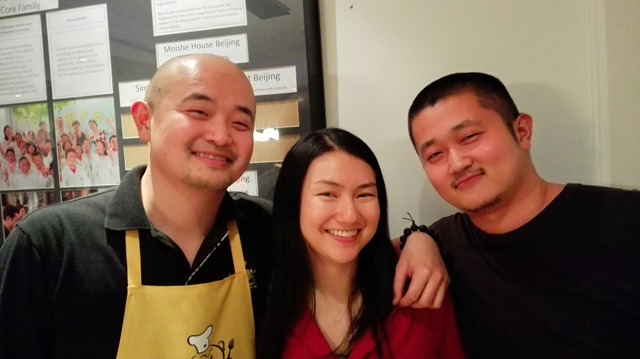 Me with two handsome owners of the Fat Face. 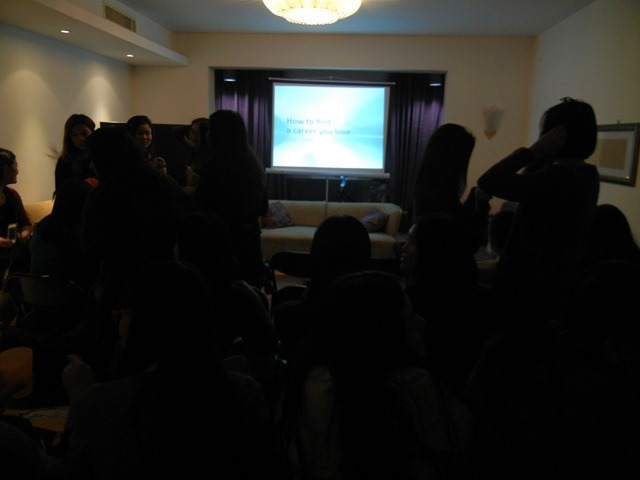 The second Moishe’s House event I have attended is a speaker salon.  The speaker is Joy Chen, the former Deputy Mayor of Los Angeles.  The meeting was right after the LeanIn conference in Beijing, hence a lot of professional women opted to hear her out in this more relaxed and intimate session. 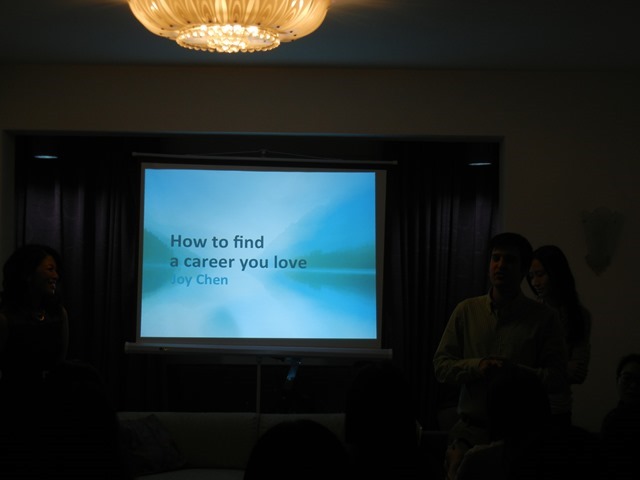 I came over because of her topic, a very eye-catching one indeed. 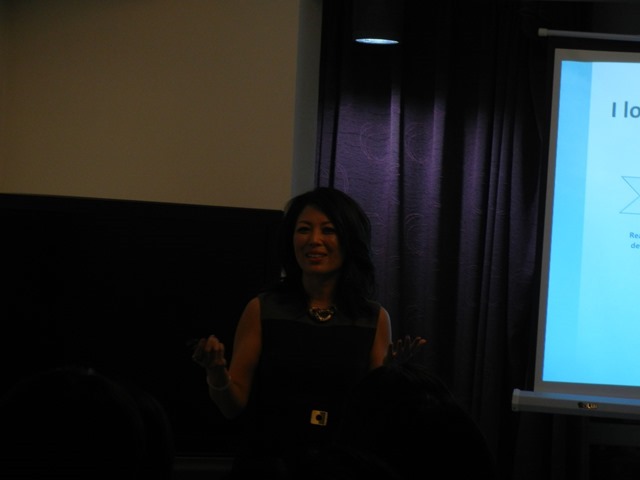 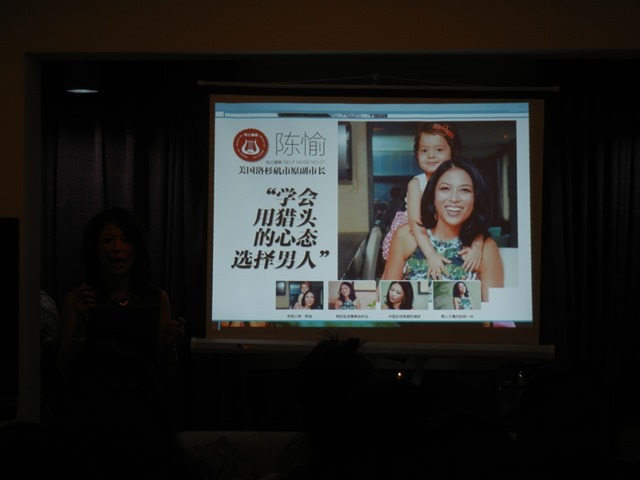 One of numerous other publications she made, “You are a headhunter. Men are your candidates”. 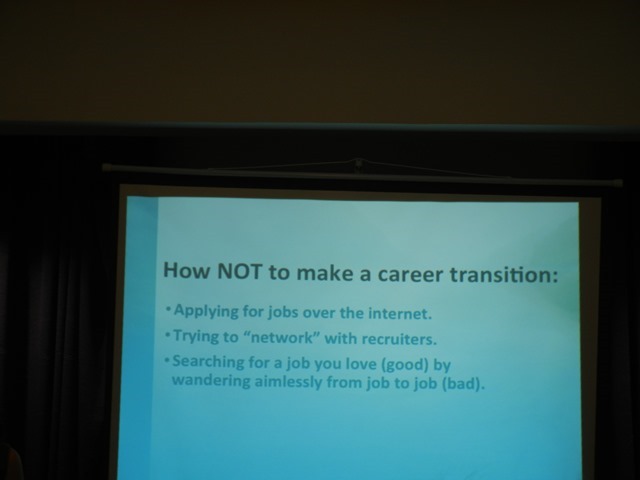 According to Joy, internet and headhunters are not great ways to land great jobs. 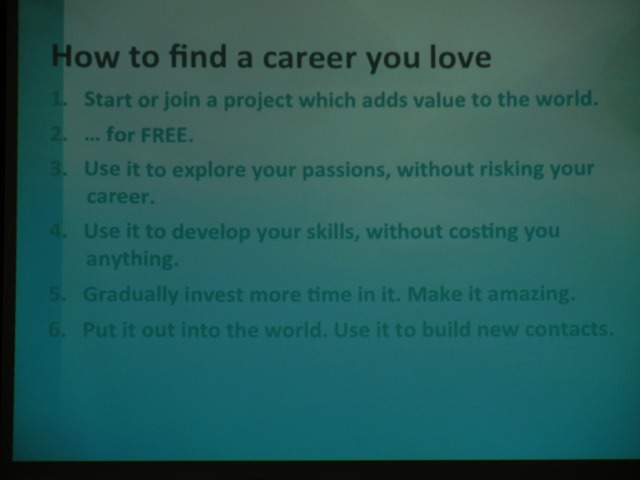 You should start working at something you want by doing it for free.  Well, that doesn’t work for actuary, and it will destroy translation industry.  So do apply this with caution. 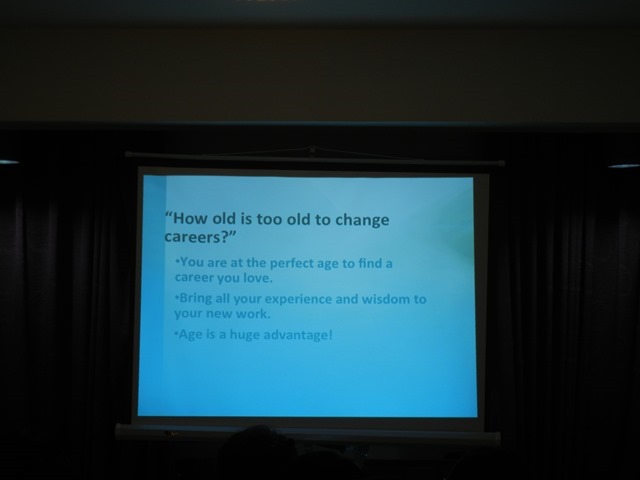 Lots of Chinese need to hear this out, but it’s not always true either.  You can’t start run-way modeling at bare age of 40 (though people like me don’t think it’s a real career), and you can’t start simultaneous interpreting at 45 (I’m already a bit late on that). 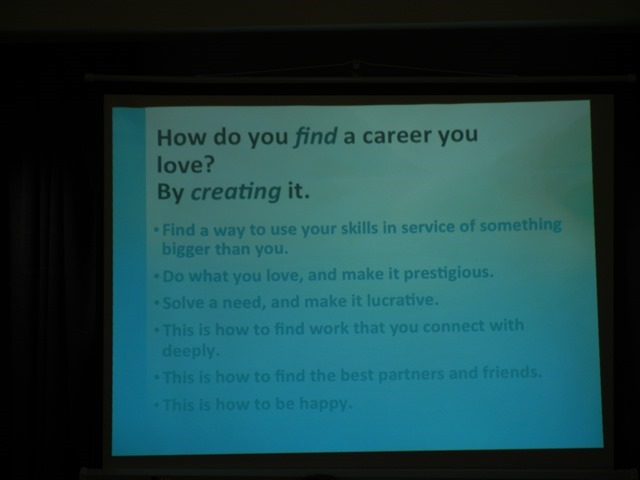 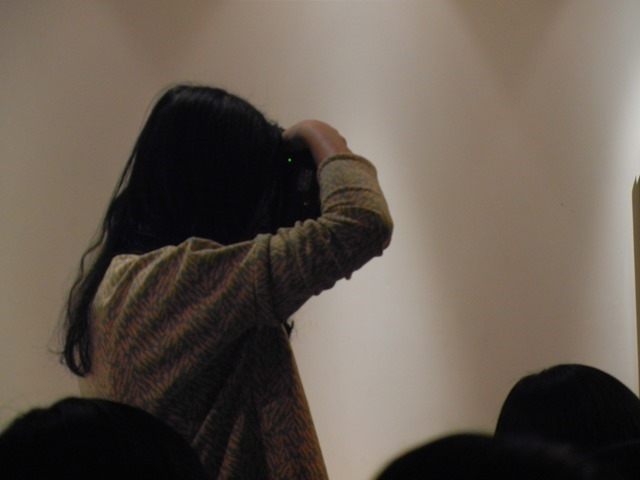 Thoughout the entire session, we are 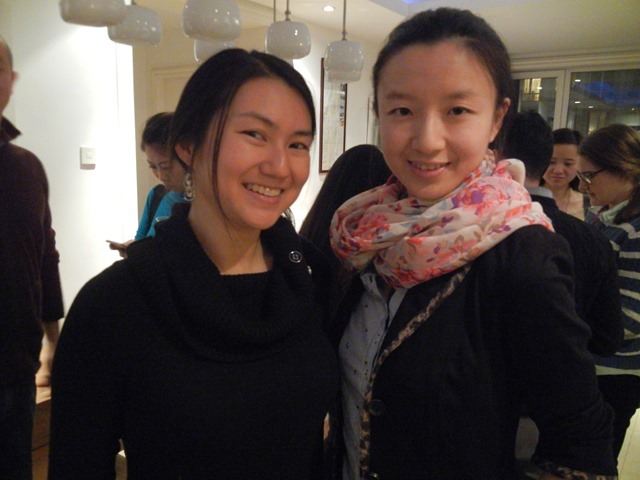 Found a fan for my blog during the session, Beth met me up a few weeks ago.   We chatted a little while about my trip.  She’s also a keen adventurer. 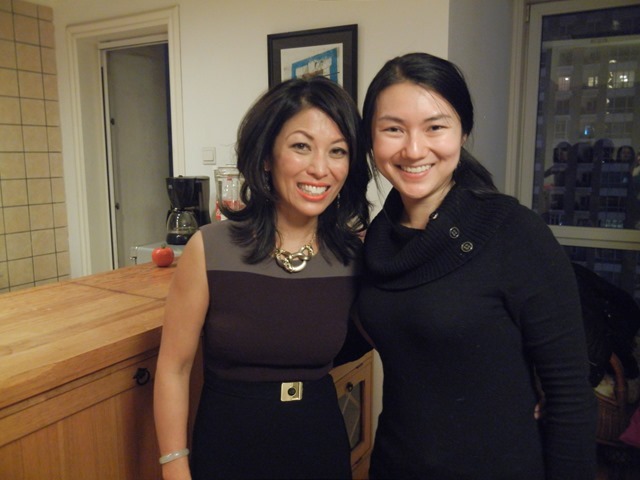 Me and the speaker, Joy Chen.

It has been 3 months since my alma mater (University of Texas) alumni group met.  One of our classmates mentioned a start-up gathering at one of the big four private clubhouses, so we all decided to jump in.  I decided to check it out despite the fact it being a little pricey.

The clubhouse, in fact, is not as lavish as I have expected – at least not the part we have been in.  With all the Top 500’s China office representatives’ memberships, it is quite low key indeed. 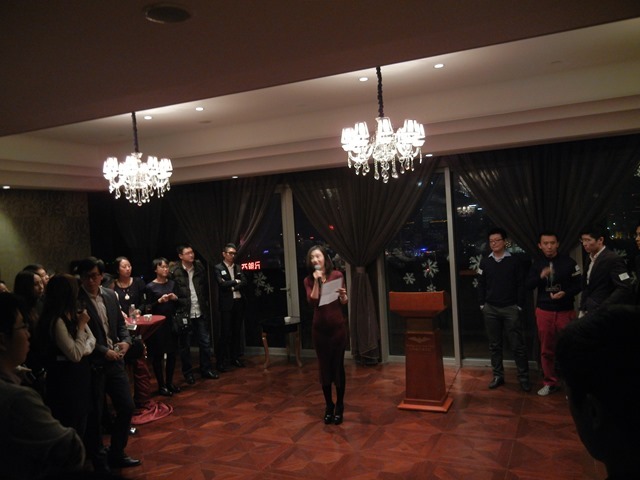 Amid all the noises from rather exciting crowds, our little speaker series sailed off. 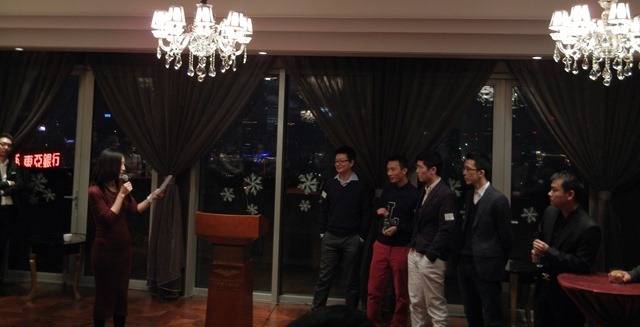 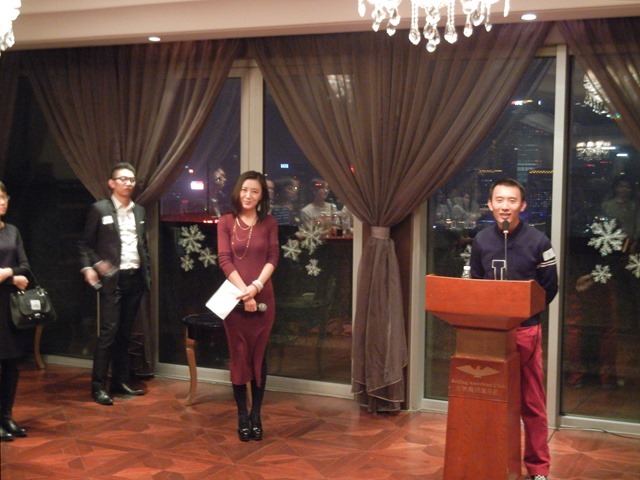 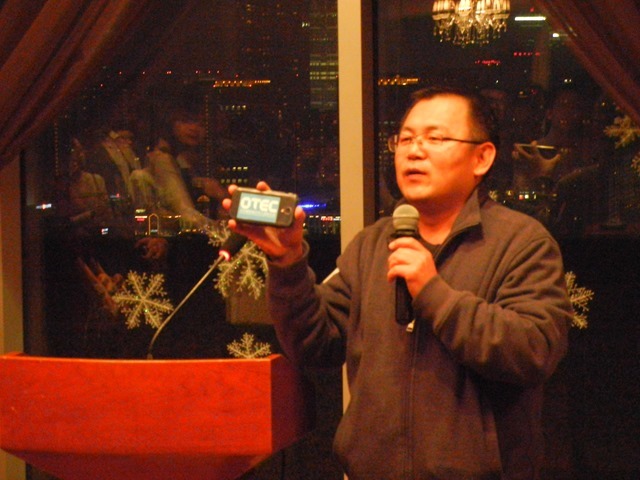 One guy even posted his card on back of his cell phone, “if you ever need investment, let me know. Our threshold is low and we haven’t finished our budget every year yet.” 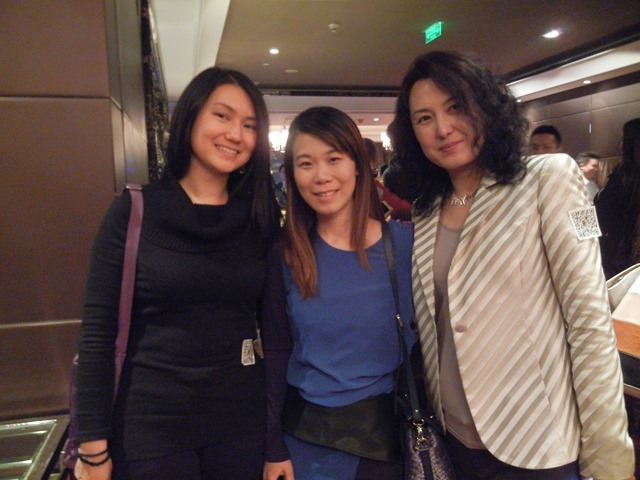 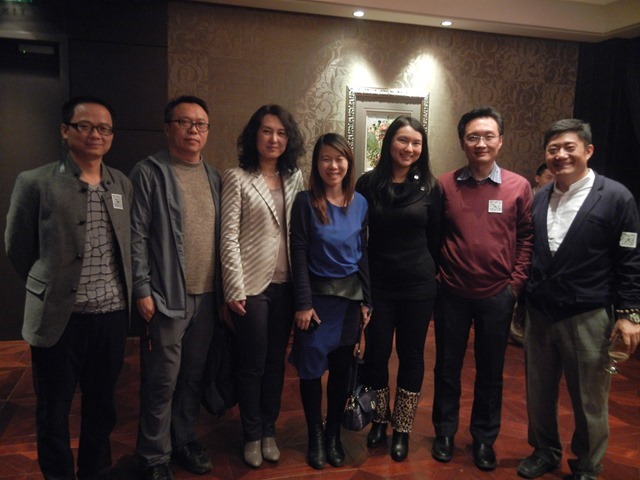 All the Longhorns at the event.