The other day I was passing by this park on my way to my cousin’s wedding.  I’ve heard about this park since I was little, but didn’t know it was open for public.  Then a friend told me all about the lotuses in the park and I went, “did you know the story of this park?”

The fabled garden used to be the grandest imperial garden filled with ages of treasures. It is known as the Versailles of the East and Garden of Gardens in its heydays.  However, it too cannot escape the destruction of China a century ago.  Most of its treasures were taken away when Europeans and Americans invaded China during the Eight Nations Alliance War and then they burned it to the ground – along with 300 garden servants and maids who were left behind. The burning took three days, and what’s left was further looted till the opening of the Republic.

“Yuanmingyuan (Garden of perfect splendor) is renowned throughout the world for its fabled charms and association with Chinese modern history…” you could read the rest of the history here http://www.yuanmingyuanpark.com/zy/ymyywjj.htm. 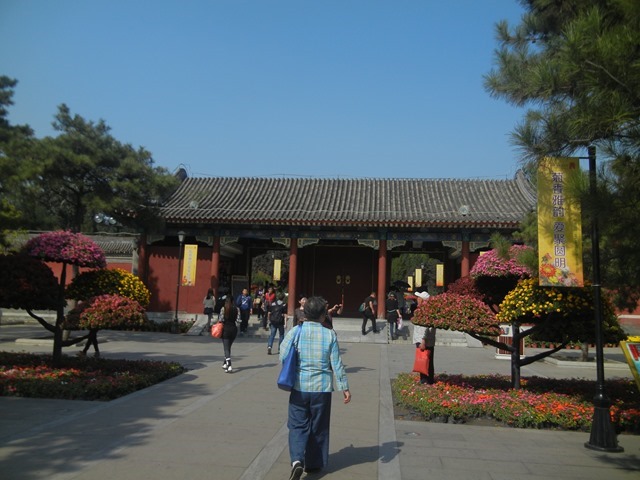 Alas, the pollution was finally gone and we are able to visit this legendary ruin.

Just like everywhere in China in autumn, there is also a chrysanthemum show in the park. 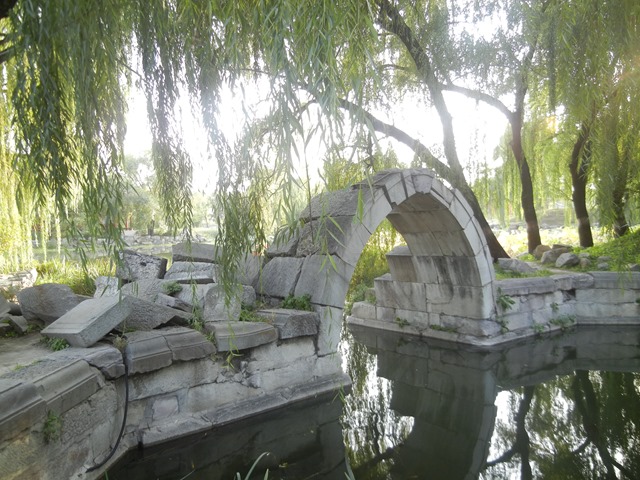 The only bridge remained after the loot and the burning, as a memorial to the shameful page of Chinese history. 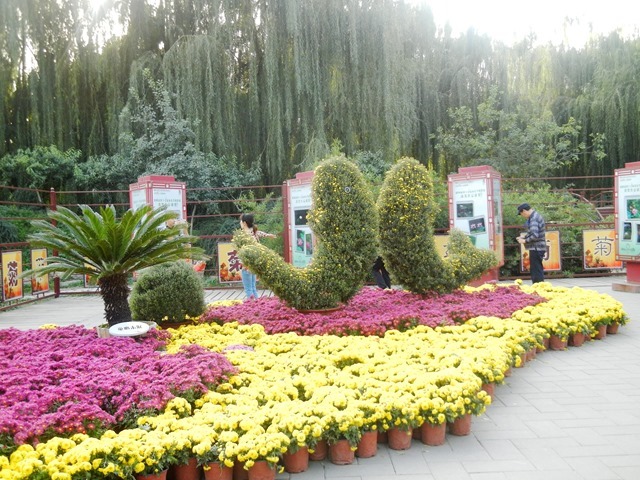 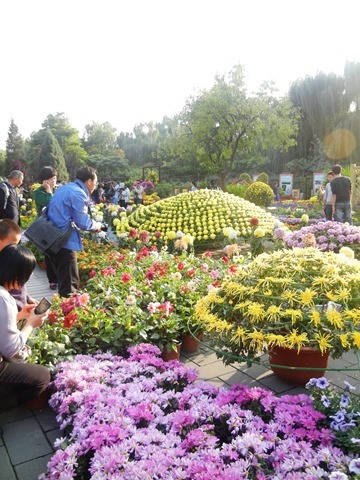 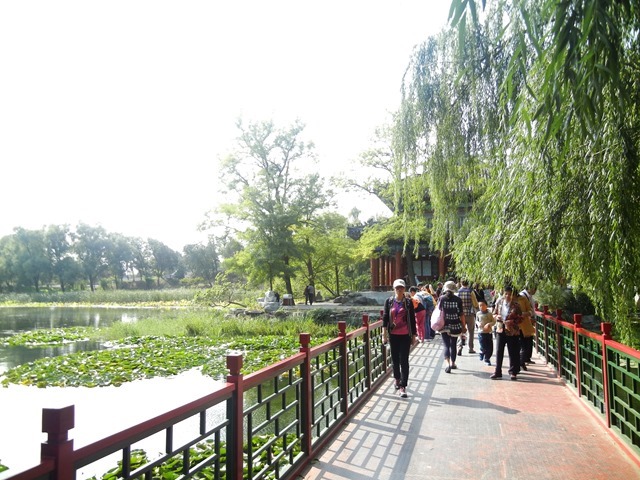 Now onto the rest of the park 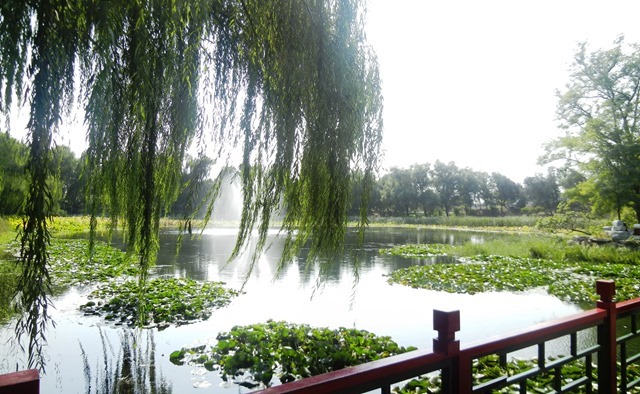 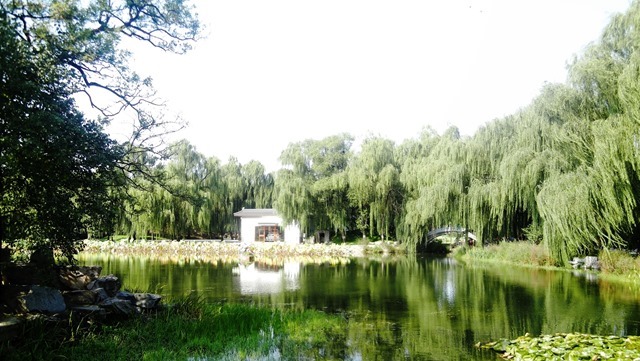 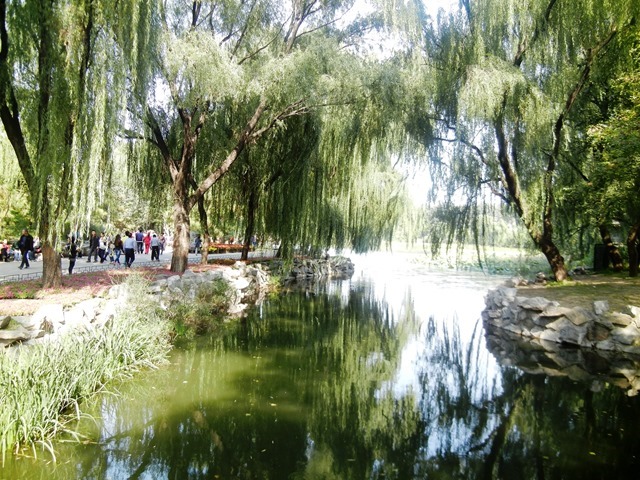 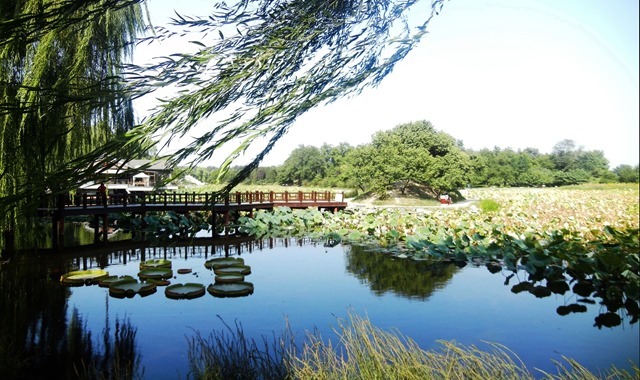 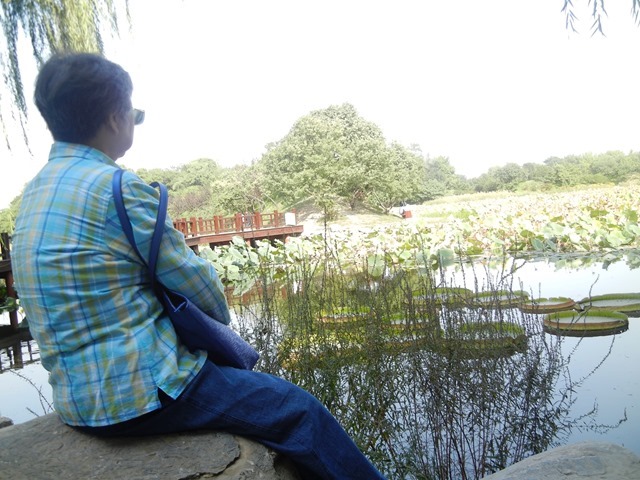 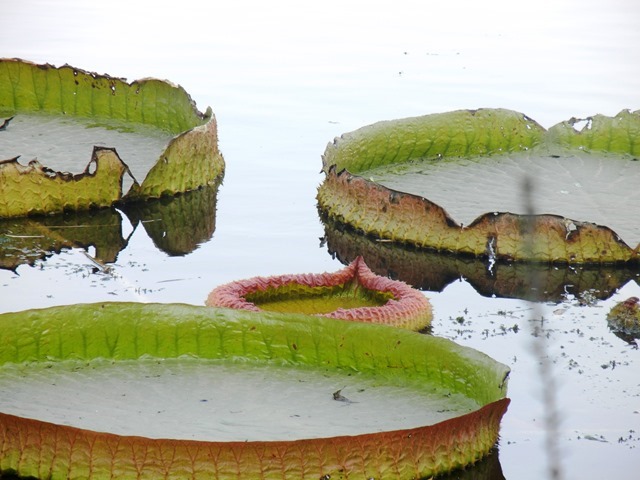 “You could put a baby on a leave like this in old days.” Mom explained.  She reminded me those traditional Chinese painting depicting a kid on a lotus leaf. 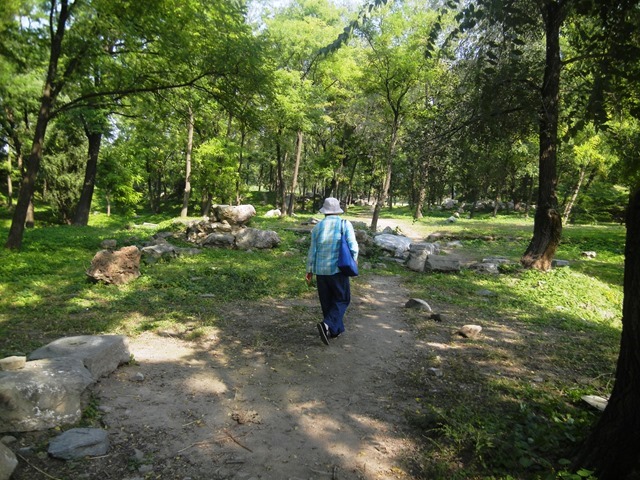 Walking among what’s left from the grand buildings.

the foundation ruins of a huge building 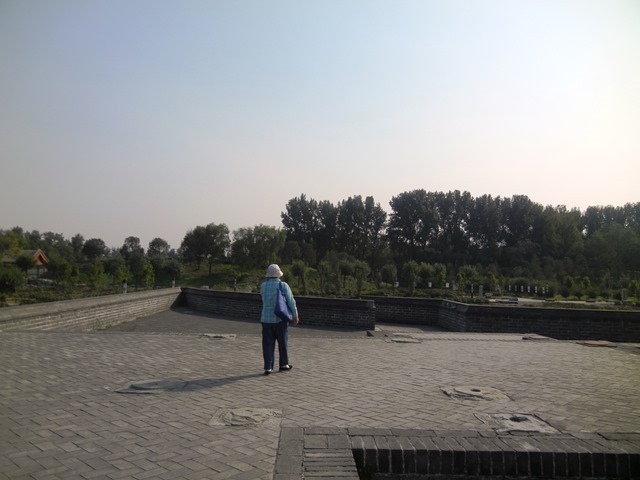 Below the foundation there is a rose garden. 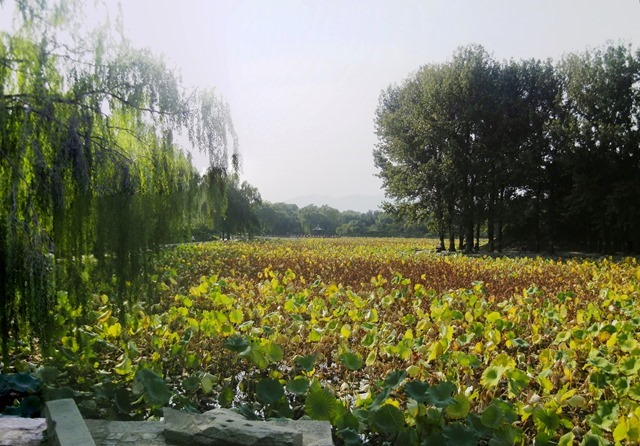 Biggest lake in the park, Fu Hai, or Fortunes Sea, with silhouettes of mountains backdrop.

Another highlight of the park, Western Building.  It was a building built in Western style. 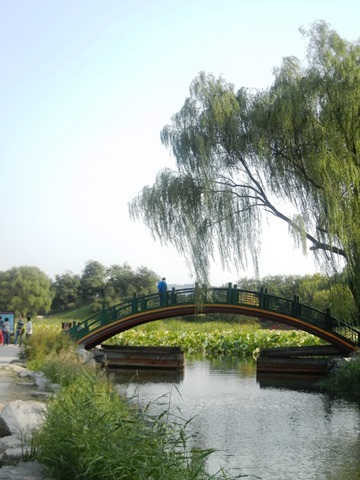 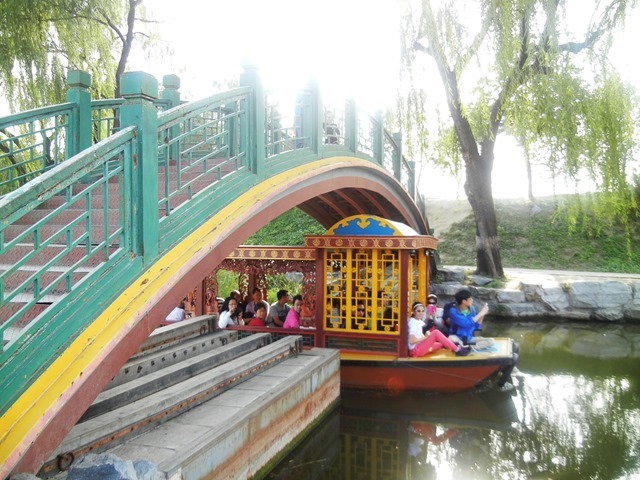 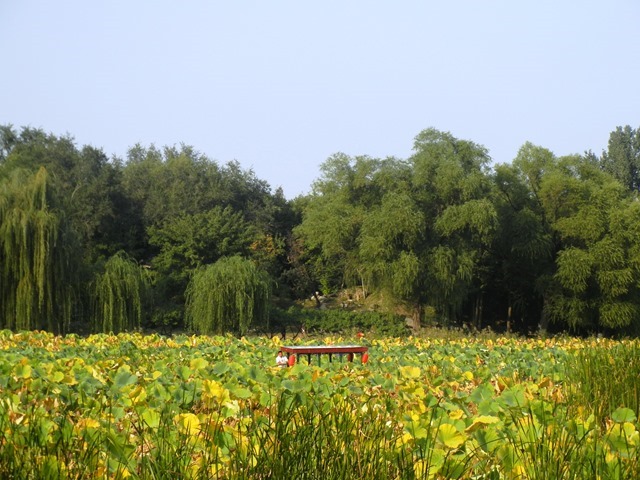 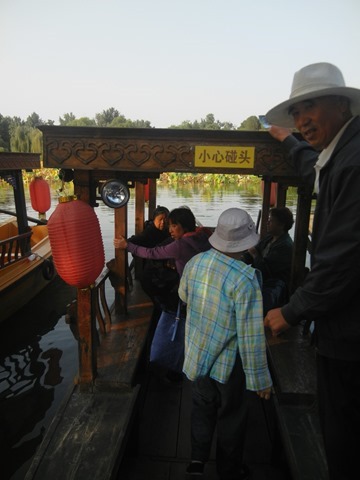 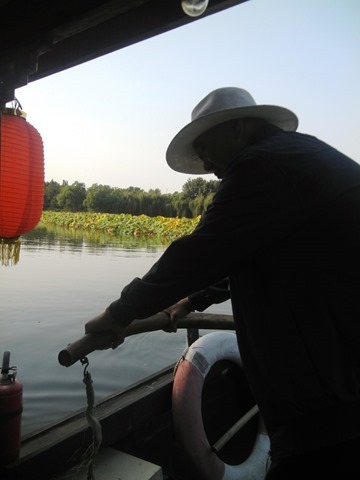 We picked a boat that is steered by a real person.  However one of the older guests complained about her dizziness from the swinging motion of the boat.

Seeing the lotuses from the water 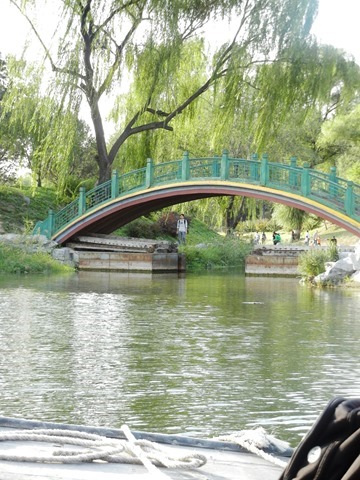 Seeing the bridge from the water. 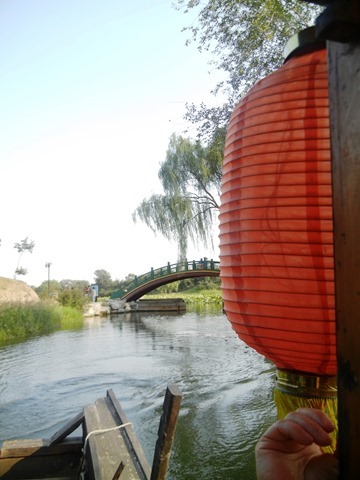 Waterway among the lotuses. 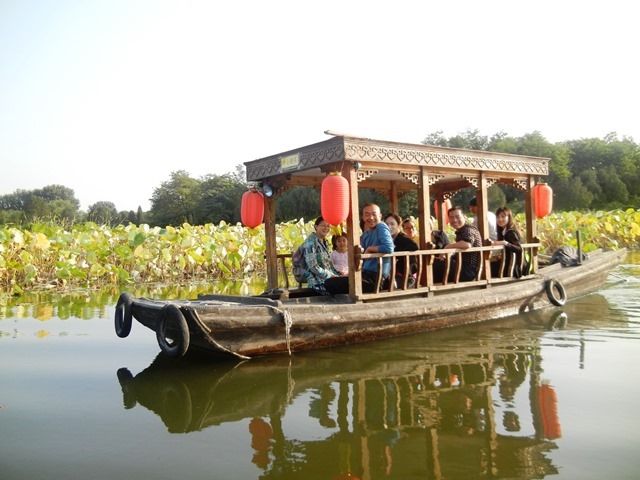